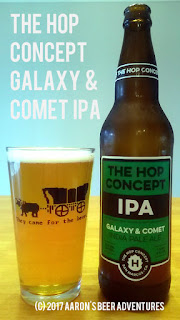 When brewed/released? Likely a limited-time beer. Released for just the second time. Available starting in March 2017. 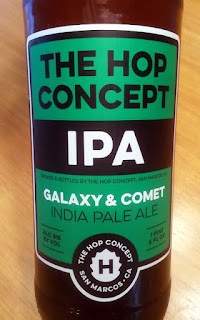 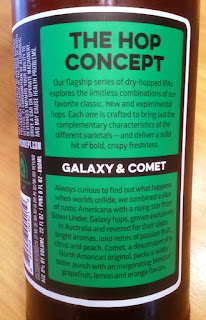 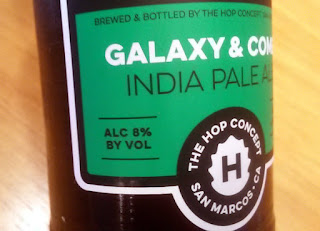 What's on the Bottle: "Our flagship series of dry-hopped IPAs explores the limitless combinations of our favorite classic, new and experimental hops. Each one is crafted to bring out the complementary characteristics of the different varietals - and deliver a solid hit of bold, crispy freshness.

Always curious to find out what happens when worlds collide, we combined a slice of rustic Americana with a rising star from Down Under. Galaxy hops, grown exclusively in Australia and revered for their clean, bright aromas, lend notes of passion fruit, citrus and peach. Comet, a descendant of a North American original, packs a wildly bitter punch with an invigorating blend of grapefruit, lemon and orange flavors."

Where distributed: Unknown, but can at least be found on the West Coast.

Overall (20%): An awesome Double IPA. The Hop Concept apparently also bottles beers outside the four seasonal offerings listed on their website. To me, Galaxy & Comet possessed tropical characteristics similar to Dank & Sticky IPA, yet I found was also more bitter. Untappd had this at 72 IBU, but it felt like 95+ to me. Probably all tasting similarly bitter to people at some point. Again, fairly standard price for a 22 oz, and one you should try if you're into the bitter West Coast style IPAs. 4.25/5