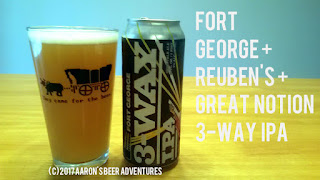 When brewed? Seasonal beer. Released late May 2017 in Astoria and early June 2017 in Portland. Fort George may do a collaboration with different breweries each year. Fort George's website says 3-Way IPA will be available from June to September 2017.
IBU: 65 (according to Untappd)

What's on the Website: "JUICY, UNFILTERED, ELECTRIFIED
"This fruit-forward haze of Azacca, X331, Mosaic, and Citra hops plays on a balanced bassline of malt with a wicked unfiltered keytar solo. 3-Way IPA 2017 is a juicy collaboration between Fort George, Great Notion, and Reuben’s Brews that strikes a smooth, electric gold riff on a Vermont style. Available at Pacific Northwest venues summer 2017 — drink fresh and keep those cans cold-stored."

Taste (40%): Follows the nose throughout. Fruit-forward with some dank. Aftertaste has wonderful citrus. No octane. Before I knew it, the glass was empty again. Addicting. 5/5

Overall (20%): A world-class IPA. Fort George hit another monster home run here, and as much as I enjoyed the 2016 version, I thought this year's brew was even better. An accurate take on the New England style, with tons of fruit flavor and some dankness. Before I knew it, not only was the pint glass empty, but the entire 4-pack was consumed. I may be biased towards the New England IPA style, but this is one I would keep getting again and again. I can't wait for next year's version. 5/5