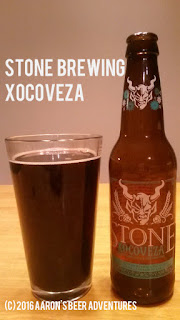 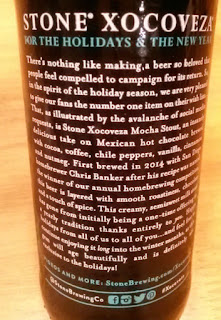 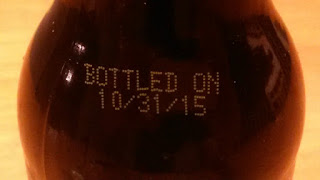 What's on the Website: Our chocolaty, winter-spiced mocha stout is back. This insanely delicious take on Mexican hot chocolate is crafted with cocoa, coffee, pasilla peppers, vanilla, cinnamon and nutmeg. First brewed in 2014 with homebrewer Chris Banker after his recipe was named the winner of our annual homebrew competition, it quickly became a cross-country sensation as craft beer media and fans cheered for Stone Xocoveza...and clamored for more. We too loved this beer, so of course we caroled ¡Claro que sí!

Now gifted with a new name, Stone Xocoveza for the Holidays & the New Year has joined our eminent lineup of special releases. We're releasing it just in time for that time of the year when the joyous spirit of giving is in the air and good behavior is generously rewarded." Click here for more!

What's on the Bottle: "There's nothing like making a beer so beloved that people feel compelled to campaign for its return. So, in the spirit of the holiday season, we are very pleased to give our fans the number one item on their wish lists. That, as illustrated by the avalanche of social media requests, is Stone Xocoveza Mocha Stout, an insanely delicious take on Mexican hot chocolate brewed with cocoa, coffee, chile peppers, vanilla, cinnamon and nutmeg. First brewed in 2014 with San Diego homebrewer Chris Banker after his recipe was named the winner of our annual homebrewing competition, this beer is layered with smooth roastiness, chocolate and a touch of spice. This creamy, semisweet milk stout has gone from initially being a one-time offering to a yearly tradition thanks entirely to you. Happy holidays from all of us to all of you...and feel free to continue enjoying it long into the winter months, as this gem will age beautifully and is definitely not exclusive to the holidays!"

REVIEW:
Appearance (5%): Poured black into a pint glass. Virtually zero head (which would be a tan color), likely because I did not drink it right away and did not store it properly (see above). 3.75/5

Smell (25%): Simply awesome. Predominantly coffee and nutmeg, with cinnamon and a hint of vanilla. 4.5/5

Taste (40%): Intense chocolate, coffee, and nutmeg upfront, akin to a Mexican chocolate coffee. Cinnamon and vanilla swoop in next. Chiles are there but no heat. Frankly, I found the nutmeg a tad overpowering here. Complex stuff and tasty. 4/5

Mouthfeel (10%): Medium-full body with virtually no carbonation left on this one. Bitterness from the coffee. 3.75/5

Overall (20%): A solid mocha/milk stout. Unfortunately, I did not follow Stone's explicit instructions on aging this beer because I left it in the refrigerator (which is anywhere from 35-40 degrees) for a good month before I tried this. While I like that it delivered on the Mexican Chocolate aspect, I found the nutmeg overpowering as noted above, and I thought that made the experience less enjoyable. However, if you're a fan of that flavor, this is for you. 4/5