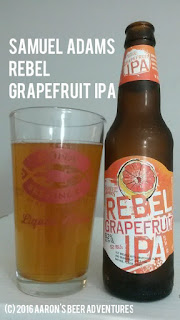 ****This beer debuted nationally in bottles around early January 2016.

Where distributed: Samuel Adams (Boston Beer Company) ships nationwide and to foreign countries. Check to see if Samuel Adams ships to your area!

What's on the Bottle: "Brewed with real grapefruit for a punch of citrusy goodness that amplifies the tropical fruit and citrus notes from the hops and delivers a refreshing finish."

What's on the Website: "Samuel Adams Rebel Grapefruit IPA is the newest addition to the Rebel family of IPAs, which are brewed to showcase a wide range of hop intensities and characteristics. Rebel Grapefruit is brewed with real grapefruit for a big punch of citrus that amplifies the tropical fruit and citrus notes of one of the Sam Adams brewers' favorite West Coast hops, Mosaic." Read more here!


REVIEW:
Appearance (5%): Pours a hazy golden into a pint glass. Not much head here, likely due to still being very cold and just out of the refrigerator. Slightly sudsy surface. 4/5

Taste (40%): A pleasurable grapefruit experience from start to finish. Nothing overpowering and not too bitter. Aftertaste does leave a bit to be desired; the flavor almost tails off too abruptly before the grapefruit bitterness (likely more so from brewing with the peel) reminds one that this is a grapefruit IPA. At times, I get a pilsner-like aftertaste. Still, it's solid overall. 4/5

Mouthfeel (10%): Medium-bodied and carbonated, with bitterness lingering on the tongue. 4/5

Overall (20%): A solid IPA. I looked forward to trying this since initially hearing about it in late 2015. Of course, I cannot help but compare it to the likes of Grapefruit Sculpin and Citrus Mistress, both of which I have enjoyed. While this is a couple of notches below both, in my book, Rebel Grapefruit IPA is a very respectable choice. 4/5