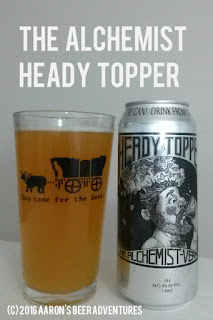 ****My friend received a full 4-pack of Heady Topper from another person back in November 2015. My very generous friend then shipped me two of those cans and the plastic ring.

What's on the Can: "Heady Topper is an American Double India Pale Ale. This beer is not intended to be the biggest or most bitter. It is meant to give you wave after wave of hoppy goodness on your palate. Tremendous amounts of American hops will creep up on you, and leave you with a dense hoppy finish in your mouth. So drinkable, it's scary. Sometimes I wish I could crawl right into the can. Freshness and control have always been my main concern when it comes to our beer. We are committed to providing you with an unfiltered and unpasteurized hop experience. Why do I recommend that you drink it from the can? Quite simply, to ensure a delightful, hop experience. The act of pouring it in a glass smells nice, but it releases the essential hop aromas that we have worked so hard to retain. If you MUST pour it into a glass, you may find that some of the hop resins have settled to the bottom - leave them in the can when pouring. This beer is perishable, and at its best when it is young, fresh and hazy. Keep it cold, but not ice cold. Drink this beer immediately, we are always making more." 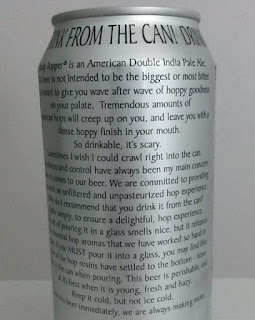 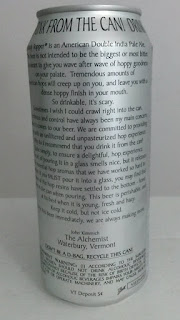 What's on the Website: "We love hops - that's why our flagship Double IPA, Heady Topper, is packed full of them. Heady Topper was designed to showcase the complex flavors and aromas these flowers produce. The Alchemist has been brewing Heady Topper since 2003. This Double IPA is not intended to be the strongest or most bitter DIPA. It is brewed to give you wave after wave of hop flavor without any astringent bitterness. We brew Heady Topper with a proprietary blend of six hops - each imparting its own unique flavor and aroma. Take a big sip of Heady and see what hop flavors you can pick out. Orange? Tropical fruit? Pink Grapefruit? Pine? Spice? There is just enough malt to give this beer some backbone, but not enough to take the hops away from the center stage." Read more here!


REVIEW:
Appearance (5%): Pours a cloudy golden into a pint glass with a few millimeters of white head. An unfiltered beer, just as advertised. 4.25/5

Smell (25%): An eruption of tropical aroma right when you pop the can. If poured into a glass, there's also an amazing balance of sweet, syrupy, malty, tropical (grapefruit, pineapple, orange, etc.) and some herbal. 4.75/5

Taste (40%): Wonderful blast of tropical fruit masterfully blended with syrupy-sweet malt, herbal, and pine. Amazingly smooth. A pleasing tropical/herbal bitterness sticks around and plateaus for several seconds after the sip. An extra jab of tropical intensity hits right as you swallow. Virtually all alcohol flavor is drowned out. Masterfully done. 5/5

Mouthfeel (10%): Medium to medium-full bodied; this beer blasts the tongue with pleasing tropical bitterness, balanced off by some herbal notes. Very light carbonation on the tongue. A malty, syrupy nature that also leaves a slightly dry tongue. 4.75/5

Overall (20%): A world-class Double IPA. So I finally got to try Heady Topper after waiting more than two years for a can. It goes without saying that Heady Topper is one of the most hard-to-get year-round beers out there; a long line has formed by the time the shipment comes in, and any retail store carrying it sells out of their allotment in a few hours. The very lucky ones score a max of one case (six 4-packs), while many of the other lucky people in line settle for a single 4-pack. I've only waited in a long line one other time to date for a beer (the 2015 release of Pliny the Younger in Portland), so that particular concept is simply foreign to me. It frankly borders on crazy or ridiculous.

But I can see why Heady Topper is so special. Incredible tropical flavors. The malty and herbal qualities here add depth without overpowering the tropical features that I crave so much. The additional tropical burst I get when I'm about to swallow that latest sip just bombards my mouth with more deliciousness. Heady Topper really is a flavor bomb from start to finish -- and well into the aftertaste. For 120 IBUs, it is ridiculously drinkable and scores mega bonus points.

Heady Topper has received a ton of hype over the past several years, and yes, whether a beer is "overhyped" or not can affect a person's subjective thoughts. It's the same way with Pliny the Elder, another coveted Double IPA from California. Numerous reviews have been posted about Heady Topper, so I might as well throw my thoughts into the hopper. While I read every article I could find on Heady Topper, I didn't bother reading many reviews. My scores of this beer reflect what I've seen, what I've tasted, and what I remember long after the last sip is gone.

In what could be a huge compliment for Block 15 Brewing, I believe Sticky Hands and Heady Topper have some similar traits. The hop blend might be totally different, but I enjoy both beers wholeheartedly. The 4.6 final weighted rating that I gave Sticky Hands last December may deserve a higher score.

No, my palate is not sophisticated enough to pluck Heady Topper out of a group in a blind taste test. But I certainly would travel across the United States to stand in line for at least one more 4-pack. The Alchemist is planning a second location and hopes to produce more Focal Banger, their Single IPA that receives its own fair share of rave reviews. And yes, the intent of the trip is also to try a fresher batch of Heady Topper, along with other beers only found in the region. New England has been officially put on notice. 4.75/5