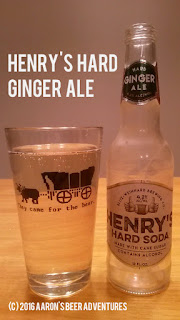 Where distributed: Blitz-Weinhard Brewing plans to distribute this throughout the United States. Click for their hard soda finder!

What's on the Website: "Get ready to go buckmild with Henry's Hard Ginger Ale. We took the simple, delicious, and refreshing taste of ginger ale, balanced herbal and ginger notes with real cane sugar, and added a little kick of something we call 'maturity.' It's a modern twist on a classic, kind of like you."  Click here for more!

Taste (40%): Once again, spot on as advertised. Basically ginger ale all the way through, with slight malty wine cooler on the aftertaste. People may not detect it until several sips in -- or perhaps not at all. Much sweeter than its hard orange soda cousin. 4.25/5

Overall (20%): A excellent hard soda. To me, a notch above the hard orange soda, as this one masks the malty wine cooler taste much better. The color is clearer than other ginger ales I've seen (certainly clearer than Not Your Father's Ginger Ale). I'm hoping a strawberry soda is in the works somewhere, because I would also be all over that one. Until then, another solid alcoholic soda. 4.25/5