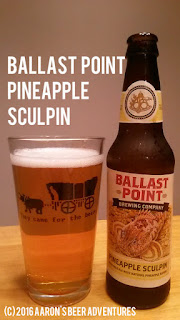 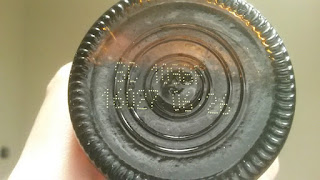 What's on the Website: "Our Pineapple Sculpin IPA came from one of many small-batch cask experiments to enhance the flavor of our signature IPA. With so many tropical hop notes in Sculpin, how could we not try adding some sweet, juicy pineapple? The combination of fruity flavors and hop intensity definitely packs a punch." Read more here!


REVIEW:
Appearance (5%): Poured clear golden-orange into a pint glass. Some off-white head, with some lacing left on the glass. 4.25/5

Smell (25%): Sweet and slightly malty with noticeable pineapple juice and other tropical notes. 4.25/5

Mouthfeel (10%): Medium-bodied, still refreshing thanks to the pineapple. Some carbonation, and bitterness lingers on the tongue. 4/5

Overall (20%): A solid IPA. I had been wanting to sample this since the news release broke right at the beginning of 2016. Pineapple works well with the Sculpin recipe, but perhaps I'm simply biased towards Grapefruit Sculpin. Ballast Point adds another tasty IPA variation to its lineup here. I also must give a nod to Ballast Point for getting this beer out to us fairly quickly. It was bottled on January 26 and I'm enjoying this about 10 days later. Now that's fresh. 4/5