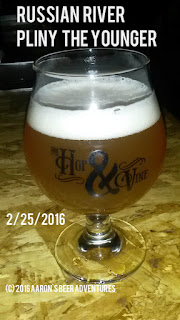 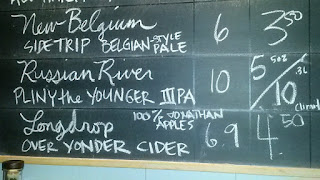 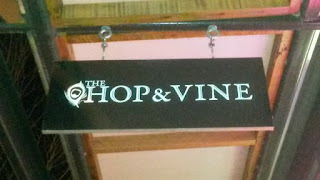 What's on the Website: "Pliny the Younger, the man, was Pliny the Elder's nephew and adopted son. They lived nearly 2,000 years ago! Pliny the Elder is our Double IPA, so we felt it was fitting to name our Triple IPA after his son. It is almost a true Triple IPA with triple the amount of hops as a regular I.P.A. That said, it is extremely difficult, time and space consuming, and very expensive to make. And that is why we don't make it more often! This beer is very full-bodied with tons of hop character in the nose and throughout. It is also deceptively well-balanced and smooth." Click here for more!

When brewed? Seasonal beer. Only released in February.

Where distributed: Russian River does NOT bottle this beer and only ships Pliny the Younger in kegs to four states to put on draft. Pliny the Younger is released at the brewery first in early February, then gets distributed in late February to early March to very select places in California, Oregon, Colorado, and Pennsylvania. Generally, the same places get the beer every year, and it is up to them how to sell it. Some places hold publicized ticketed events, while others place the beer on tap with no fanfare -- and very lucky individuals get the chance to drink it if they see it on the menu. Not surprisingly, if the latter is done, the beer will NOT be announced on social media and will likely not even be put on the taplist menu. Those sneaky businesses....


REVIEW:
Appearance (5%): Poured clear to slightly hazy golden-orange to copper into a snifter glass. Hard to actually tell due to dim lighting at Hop & Vine. Nice frothy white head of a few millimeters. Some lacing left on the glass. 4.5/5

Taste (40%): An extremely dangerous Triple IPA that brings a lot of tropical to the forefront, slightly dank in the middle, and again asserts its tropical nature through the aftertaste. Drinks more tropical and easygoing than last year's version -- at least the one that I had. As much as I liked it last year, it tastes exponentially better in 2015. An absolute must-try for IPA fans. 5/5

Mouthfeel (10%): Fairly full bodied with good carbonation. Mostly tropical flavors engulfing the mouth. There is bitterness but it's pleasing and never too overwhelming. Refreshing. Simply world-class. 5/5

Overall (20%): A world-class Triple IPA. This was 100 times better than when I had it at Apex in 2015. Definitely way more dangerous, as the lack of octane, presence of dank, and abundance of tropical made this one so drinkable, to the point where I could have probably kept drinking this, only to realize my inebriation. This is what I was hoping for last year when I placed such high expectations on Pliny the Younger. It definitely met those expectations this year. 5/5