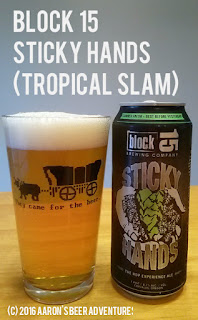 ****This is different from the usual Block 15 Sticky Hands Hop Experience Ale that I previously reviewed. This variation has "copious amounts" of Apollo, Galaxy, Mosaic, and Citra hops. 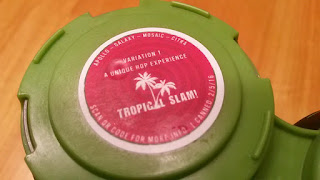 Where distributed: As of February 2016, Block 15 Brewing only distributes within Oregon, and just to FOUR Oregon cities (Portland, Corvallis, Eugene, and Ashland) at this time. Click to see where Block 15 distributes its beer!


REVIEW:
Appearance (5%): Poured mostly clear-golden into a pint glass. Still classified as an unfiltered beer but I cannot tell. Perhaps the freshness has something to do with that. Frothy white head that left some lacing on the glass. Simply stunning. 5/5

Smell (25%): Incredible, stop-the-presses tropical aroma. Getting pineapple, grapefruit, orange, and mango, for starters. A bit of dank and malty ideally complements everything. Just keep the glass under my nose all day. All day. Wow. 5/5

Taste (40%): The first sip was a wonderful blend of tropical, dank, and slightly alcoholic punch. About a third of the way in (until the end), the alcohol disappeared and it was all epic dank and tropical. The epitome of dangerous beer -- in a good way. Stays dank after finishing the sip, then a burst of tropical at the end. Addicting tropical aftertaste. This is what a Double IPA should be. 4.75/5

Overall (20%): A world-class Double IPA. This beer has the God-like combination of Apollo, Galaxy, Mosaic, and Citra hops. I've long appreciated how fresh we get this beer in Oregon. The first deliveries were made five days after canning, and I bought this three days after that. Still incredibly fresh compared to other beers out there. I've had many Sticky Hands beers since my original review, and, frankly, if I were to re-rate my original Sticky Hands review, it would easily be a higher rating. If this is still listed as 110 IBUs, it tastes and feels like 60-70 IBUs. Simply put, this is a kickass beer that I would share with my closest friends -- unless I turn selfish and hoard multiple 4-packs for myself. I could be on the verge of being completely wasted at home and still want to keep drinking this. Totally worth $13. Block 15 will be getting a lot of my money as long as they keep stocking more Sticky Hands on shelves. 5/5