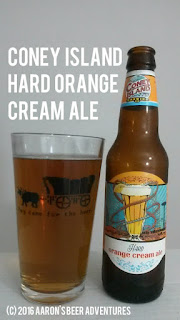 What's on the Bottle: "An amalgamation of orange, vanilla, and spice inspired by the deliciously unexpected concoctions you only find on the boardwalk. Are you tall enough to ride?"

What's on the Website: "Get your tickets here! It's a small price for a thrilling escape. Buckle up, passengers, and hang on to your hats; we're on a steep track to bring you back to the boardwalk.

Some rides are deceiving, but this one is all there. Coney Island Hard Orange Cream Ale is an amalgamation of orange, vanilla, and spice inspired by the deliciously unexpected concoctions you only find on the boardwalk. Are you tall enough to ride?" Read more here!


REVIEW:
Appearance (5%): Pours a darkish golden into a pint glass. Extremely carbonated and fizzy that reduces to a sudsy surface. 3.5/5

Smell (25%): Smells like a lovely orange creamsicle or carbonated creamy Sunkist. Orange and vanilla upfront, very appealing. But as I found out, it smelled a lot sweeter than it tasted. 4/5

Taste (40%): A balanced hit of orange, vanilla, and spices. It might be the same or similar spices that went into the Coney Hard Root Beer, as I tend to get licorice or a sarsaparilla-like aftertaste. It disappointingly tastes watered down (again), almost like it's afraid to unleash its best punch to someone. 2.75/5

Overall (20%): A fair hard soda. Much like the hard root beer I reviewed a few months back, this take on a hard orange cream soda tends to hold back on the flavor and mixes in something akin to licorice and sarsaparilla for an unknown reason. To me, the aroma was easily the best part. If you're going for a hard soda, be sweet like soda usually is. If you want an ale (beer), keep coming at me with more of those characteristics. This did not feel like a beer, and unfortunately was not a hard soda I would drink a lot of. 2.5/5