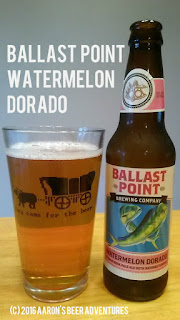 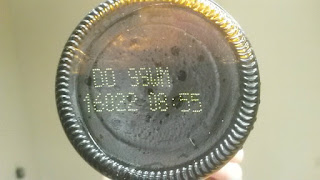 What's on the Website: "Our Watermelon Dorado Double IPA is not one to back down from big flavors. Mash, kettle and dry hopping blend to create a huge hop profile that is balanced with a blast of watermelon. The result is a refreshing brew that is all summer and no seeds." Read more here!


REVIEW:
Appearance (5%): Poured clear golden-orange into a pint glass. Some off-white head, with some lacing left on the glass. 4.25/5

Smell (25%): Mostly a sweet watermelon candy aroma with light hop profile. Think Watermelon Jolly Rancher. Not sure what to think of that. 3.75/5

Taste (40%): Initially a combination of intense hop and sweet watermelon candy experience. Hop bitterness then really drowns out the watermelon and wrecks the palate. It's a 90 IBU beer that can drink like 150. Excellent job in masking any alcohol flavors. 3.5/5

Overall (20%): An average Double IPA. This was another beer I wanted to try from Ballast Point's 2016 lineup of beers. Unfortunately, this beer left me scratching my head and making funny faces. It truly feels like you're mixing a watermelon Jolly Rancher with an IPA, and here, it just didn't jive as well as I would have hoped. The Sculpin and Dorado beers have lovely tropical flavors and speak West Coast IPA. Sometimes, you may have a big winner (i.e. Grapefruit Sculpin), and sometimes, you'll have what I felt was a moderate success (i.e. Pineapple Sculpin). While I love watermelon, it clashed too much with the hop-bitter IPA profile. It might be better off in a lighter, more mellow beer. But on the plus side, this again was a rather fresh beer coming from California (bottled January 22; drank February 6). 3/5