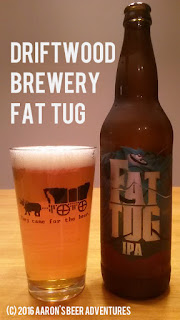 Where distributed: Driftwood Brewery distributes to the Canadian provinces of British Columbia and Alberta. They do NOT distribute to the U.S. Pacific Northwest. Click for their beer finder!

What's on the Bottle: "Take a deep breath, sailor. It's difficult to fathom, but such monstrous hop bitterness can be foiled by ample malt buoyancy; this hop monster will pull you slow and low, deep down to Hoppy Nirvana." 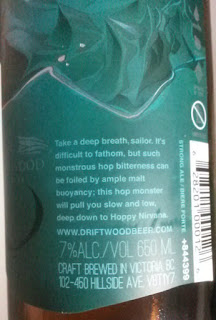 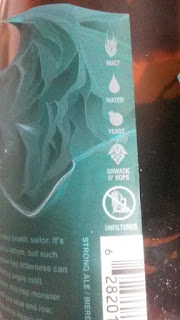 What's on the Website: "Brewed with the hop aficionado in mind! Fat Tug is a northwest style India Pale Ale with an intense hop profile with notes of grapefruit, mango, melon and passion fruit. Sufficient malt is there to provide support. At 7% alc/vol and 80+ IBUs this beer delivers on the promise to satisfy anyone with a thirst for all things hoppy!"  Click here for more!


REVIEW:
Appearance (5%): Initially poured clear golden into a pint glass. Second pour (to finish the bottle) produced a hazier golden color. The label states that this is an unfiltered beer. Frothy/foamy white head with some lacing left on the glass. 4.75/5

Smell (25%): Pleasant tropical hoppiness. Grapefruit, mango, and pineapple notes. Exactly what I want to have when drinking an IPA. 4.75/5

Mouthfeel (10%): Medium-bodied with some carbonation. Controlled bitterness lingers on the tongue. 4.75/5

Overall (20%): A world-class IPA. When planning my return trip to BC, I made sure to find all places that either sold bottles of Fat Tug or had this beer on draft. I was fortunate to find spots for draft AND bottle form. I savored each and every drop, and to me, they are just about equal either way. Fat Tug has received favorable reviews on RateBeer (99) and BeerAdvocate (94). It was still awesome some six weeks after I bought this. If you're an IPA lover and head to Western Canada, this is a beer to track down. 4.75/5