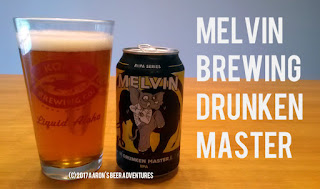 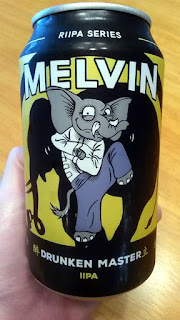 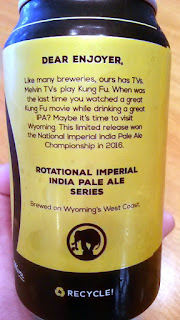 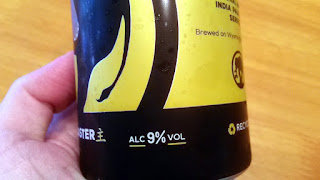 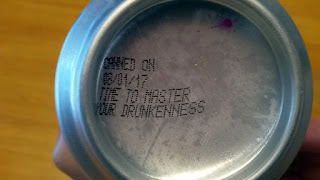 What's on the Can: "Dear Enjoyer, Like many breweries, ours has TV's. Melvin TV's play Kung Fu. When was the last time you watched a great Kung Fu movie while drinking a great IPA? Maybe it's time to visit Wyoming. This limited release won the National Imperial India Pale Ale Championship in 2016."

What's on the Website: "Born out of the Melvin R&D facility on Wyoming’s West Coast, also known as the closet. Brewed with a blend of Columbus, Citra and some Top-Secret hops left over from the great east vs. west hip hop battles. Hopped with over 3 pounds per barrel. Drunken Master is the 2016 National IlPA Champion. Sure to make you a Drunken Master if you consume too many of these bad boys. Cheers from the crew at Melvin. Please, only practice your Karate after a four pack and bow to your sensei." Read more here!

Where distributed: As of December 2017, Melvin Brewing beers can be found in six states (CO, ID, OR, VT, WA, and WY) and British Columbia. Check to see whether Melvin Brewing is in your area!

Smell (25%): Tropical pineapple and peach with complementing malt. I'd say it's similar to Asterisk; in between Melvin IPA and 2x4 Double IPA. 4.75/5

Taste (40%): Follows the nose, with dank and malty. Finishes again with pineapple and peach. Perhaps a notch or so below a couple of their other (epic) IPAs, but still amazing. 4.5/5

Mouthfeel (10%): Medium-full bodied, good carbonation. Sticky and a bit syrupy on the tongue to retain the citrus bitterness. 4.5/5

Overall (20%): An outstanding IPA. I first had Drunken Master this past summer at a Double IPA Festival and wasn't too impressed, but I wanted to give it another shot. Turned out to be a good move. While this may be a notch or two below the other Melvin beers I've had, beers such as Asterisk and Melvin IPA are in another league as far as I'm concerned. Here, the malt and dank will feel more like the 2x4 Double IPA (which has slightly more octane at 10% ABV). If you're a Melvin fan, definitely get this for science. 4.5/5