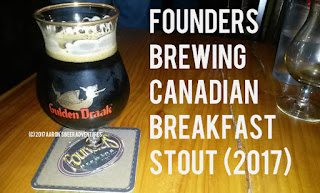 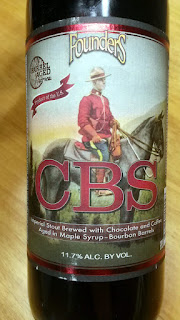 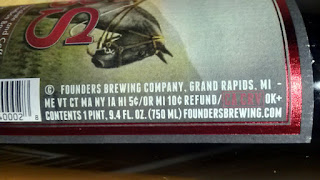 What's on the Bottle/Website: "CBS was born when we stumbled upon some bourbon barrels that had previously housed maple syrup. We opted to put the same base beer as KBS, an imperialized version of Breakfast Stout, in the maple barrels and, after one taste, we knew we had something special. Rich maple syrup, roasted coffee and velvety chocolate meld together in what can only be described as a transcendental drinking experience." Read more here!

Where distributed: As of December 2017, Founders Brewing distributes to 46 U.S. states. Founders started distribution to Washington and Oregon in February 2017. Find out if Founders ships to your area!

Taste (40%): Follows the nose. Tons of bourbon barrel-aged flavor with maple syrup, chocolate, and coffee. The sweetness from the maple is key. Good octane, but still drinks smooth for 11.7%. 5/5

Overall (20%): A world-class Imperial Stout. Because of the additional sweetness that the maple provided, I personally enjoyed this more than the annual Founders KBS that is released every April. Apparently, CBS was last bottled in 2011 and, to my knowledge, finally made its way to the Pacific NW. Not surprisingly. the locals in the Pacific NW came out in droves for CBS. While this is a pricey beer, the rarity and the incredible flavors make this money well spent. Because science. 5/5