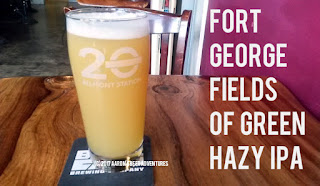 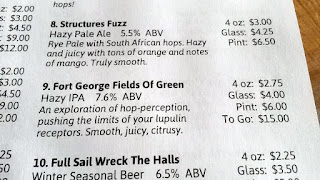 Commercial Description: "An exploration of hop-perception, pushing the limits of your lupulin receptors. Smooth, juicy, citrusy."

Where distributed: As of December 2017, Fort George distributed this beer likely just in the Pacific Northwest.

Taste (40%): Slight dank and controlled hoppy bitterness; mostly a soft, smooth tropical grapefruit and tangerine experience. Aftertaste was mainly grapefruit and other citrus. Tons of flavor from start to finish. 4.75/5

Overall (20%): A world-class IPA. Fields of Green is the latest successful Hazy IPA in Fort George's lineup. Much like Bat Sh!t Hazy in late October, this one appears to be draft only. Lots of similarities between the two beers, right down to the creamy mouthfeel, and I'd take either one any day of the week. New England-style IPA lovers will really enjoy this. Six bucks well spent. 4.75/5