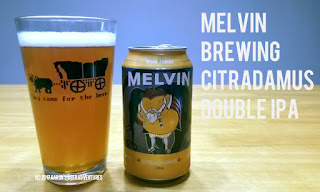 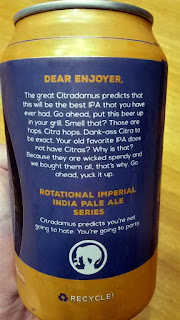 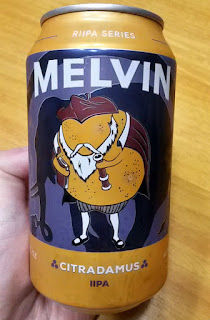 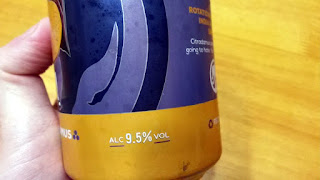 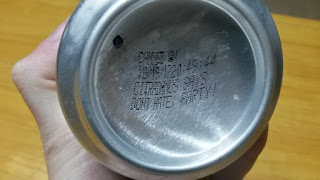 What's on the Can: "The great Citradamus predicts that this will be the best IPA that you have ever had. Go ahead, put this beer up in your grill. Smell that? Those are hops. Citra hops. Dank-ass Citra to be exact. Your old favorite IPA does not have Citras? Why is that? Because they are wicked spendy and we bought them all, that's why. Go ahead, yuck it up. Citradamus predicts that you're not going to hate. You're going to party."

What's on the Website: "The great Citradamus predicts this IIPA will be one of your favorites. Citradamus is Melvin’s world class IIPA brewed with 100% Citra hops, pristine mountain water and northwest malt. Flavors of citrus (duh), pine and total dankness. Dry hopped with ludicrous amounts of Citra for that classic hoppiness that Melvin has become known for." Read more here!

Where distributed: As of December 2017, Melvin Brewing beers can be found in six states (CO, ID, OR, VT, WA, and WY) and British Columbia. They also might be found in California and Massachusetts. Check to see whether Melvin Brewing is in your area!

Smell (25%): Mostly tropical grapefruit and tangerine with complementing malt and slight dank. Again, among the gold standards for what I want in a Double IPA. 4.75/5

Taste (40%): Tropical grapefruit/tangerine from start to finish. Complementing malt and slight dank. Aftertaste is a citrus peel with tangerine/grapefruit. Really a more citrusy version of the 2x4 Double IPA. For 9.5%, this drinks crazy easy and should be considered a very dangerous beer. Full of flavor. 4.75/5

Overall (20%): A world-class IPA. Not surprising that Melvin's latest rotational Double IPA is another big success. My reviews may have gotten slightly harsher since my discovery and love of New England-style IPAs, but even so, Melvin beers have consistently remained among the top IPAs I've had. Get this while you can. 4.75/5