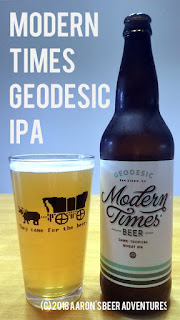 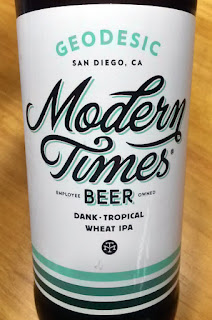 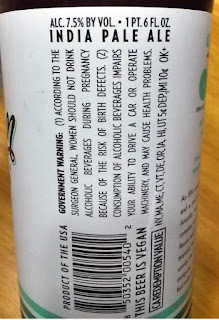 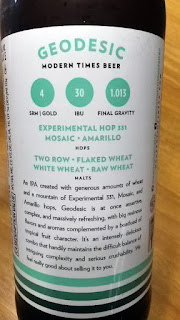 What's on the Bottle: "An IPA created with generous amounts of wheat and a mountain of experimental 331, mosaic, and Amarillo hops, Geodesic is at once assertive, complex, and massively refreshing, with big resinous flavors and aromas complemented by a boatload of tropical fruit character. It's an intesely delicious combo that handily maintains the difficult balance of intriguing complexity and serious crushability. We feel really good about selling it to you."

Where distributed: As of July 2018, Modern Times distributes their beer to California, Hawaii, Oregon, and Washington. Modern Times also opened a taproom in Portland in 2018. See if Modern Times ships to your area!

Smell (25%): Lots of tropical citrus and stone fruit with complementing creamy malt and slight dank notes. The tropical is the big star. 4.5/5

Taste (40%): Follows the nose. Tropical with some dank upfront, yet very refreshing and flavorful throughout. Aftertaste has more citrus peel, but the bitterness is low and stays in check. 4.5/5

Mouthfeel (10%): Medium-bodied, some carbonation. Juicy with slight dryness on the tongue. 4.25/5

Overall (20%): An excellent to outstanding IPA. Geodesic had been in my fridge for a couple months, which is probably what Modern Times would suggest not doing with this beer, but the flavor here remained awesome. As always, I love a good tropical-forward beer, and this one hit all the right notes. And now that they have a taproom in Portland, I will have to check that out as well for science. 4.5/5