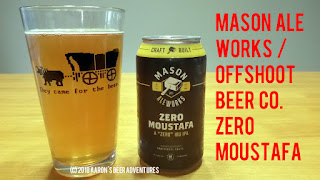 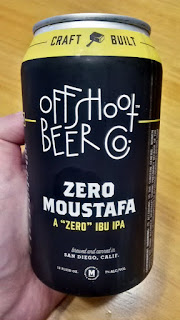 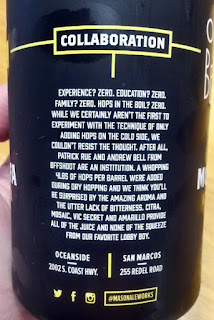 What's on the Can: "Experience? Zero. Education? Zero. Family? Zero. Hops in the boil? Zero. While we certainly aren't the first to experiment with the technique of only adding hops on the cold side, we couldn't resist the thought. After all, Patrick Rue and Andrew Bell from Offshoot are an institution. A whopping 4 lbs of hops per barrel were added during dry hopping and we think you'll be surprised by the amazing aroma and the utter lack of bitterness. Citra, Mosaic, Vic Secret and Amarillo provide all of the juice and none of the squeeze from our favorite lobby boy."

What's on the Website: "Huge hop notes hit you in the face, while tropical fruit notes envelop you in a hug. A smooth and surprisingly low bitter finish will have you asking for more." Read more here!

Where distributed: As of July 2018, Mason Ale Works beers are found in California.

Taste (40%): Soft tropical juicy from start to finish. Probably a bit on the diluted side. As advertised, there is no bitterness. Very easy drinking and clean. 3.75/5

Mouthfeel (10%): Medium-bodied, some carbonation. Juicy on the tongue with trace dryness. 4.25/5

Overall (20%): A solid IPA. I admittedly smirked when seeing this as a "Zero IBU" IPA, but Mason Ale Works and Offshoot Beer delivered as promised. To me, it was a very straightforward, juicy IPA, with the bitterness taking a vacation. At the end of the day, it didn't stand out as an elite beer, although the lack of bitterness is pretty cool. 3.75/5