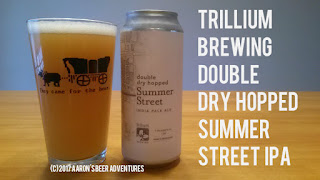 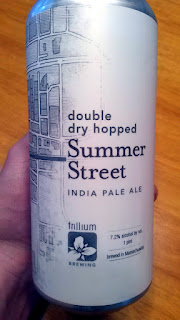 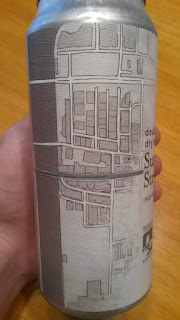 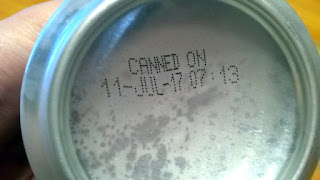 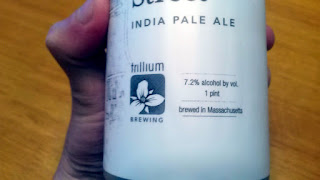 What's on the Website: "Our enhanced version of Summer St. IPA features a secondary dry hopping with Simcoe which leads to a fuller mouthfeel, amplified nose, and an intensified depth of grassy, raw hop character. Double Dry Hopped Summer Street is hazy, sunflower gold in appearance with strong aromatics of pine and lemon. Bold flavors of juicy tangerine, pine resin, and green pear dominate the palate with modest bitterness and a dry finish." Read more here!

Where distributed: As of September 2017, Trillium Brewing only distributes within Massachusetts. Click here to see where!


REVIEW:
Appearance (5%): Poured hazy light orange to light peach-colored into a pint glass. Frothy off-white head. Some lacing at the top of the glass. 4.5/5

Taste (40%): Slightly resiny/earthy at the start, then getting tropical citrus passion fruit and tangerine afterwards. Refreshing lemon comes in as well. Tropical is assertive as usual. 4.75/5

Overall (20%): A world-class IPA. The double dry hopped beers that I've gotten from Trillium confirm the amped-up experience from its "regular" counterparts. The ratings for Trillium beers will (unsurprisingly) be identical or close to it. If you're a fan of the New England-style IPA, this is where you want to start your adventure. 4.75/5