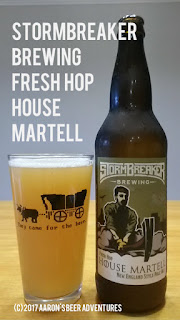 Date Purchased: October 1, 2017
Date Drank: October 28, 2017
When brewed? Limited-time fresh-hop beer. Released around late September 2017. Stormbreaker also has brewed House Martell (not the fresh hop version) in the past, and could bring it back when they choose.
IBUs: 50 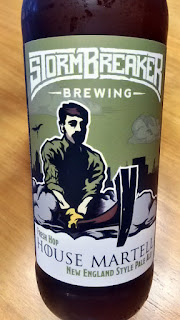 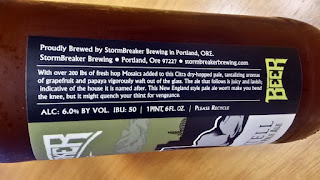 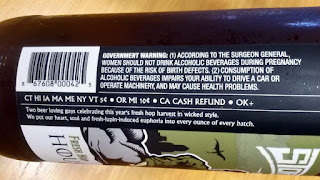 What's on the Bottle: "With over 200 lbs of fresh hop Mosaics added to this Citra dry-hopped pale, tantalizing aromas of grapefruit and papaya vigorously waft out of the glass. The ale that follows is juicy and lavish; indicative of the house it is named after. This New England style pale ale won’t make you bend the knee, but it might quench your thirst for vengeance."

Where distributed: Stormbreaker Brewing distributes in Oregon and could otherwise be found in the Pacific Northwest.

Smell (25%): Intense tropical papaya and grapefruit. Didn't even have to bring my nose to the glass. 5/5

Taste (40%): Follows the nose; a lot of papaya grapefruit and slightly resiny notes. Aftertaste brings a barrage of citrus tangerine. Drinking this all day, every day. 4.75/5

Mouthfeel (10%): Medium-bodied; some carbonation. Extremely juicy on the tongue. 4.75/5

Overall (20%): A world-class Pale Ale. I definitely had to try it because it was a New England-style beer, and I haven't drank many that are classified as pale ales. But heck, it was also a fresh hop beer, which only comes around during early fall. I was sold on the beer's huge tropical presence. Extremely refreshing, like drinking a slightly carbonated juice. Another kickass beer from Portland. 5/5