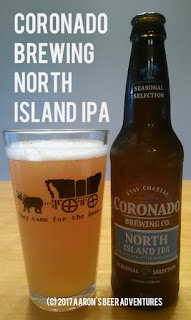 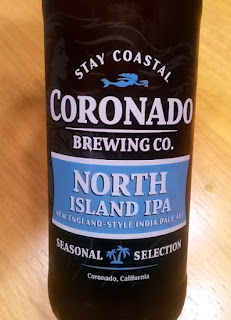 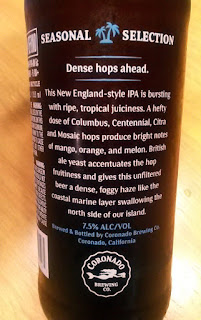 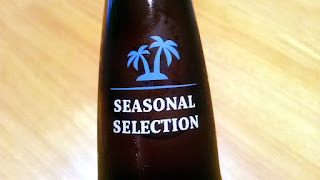 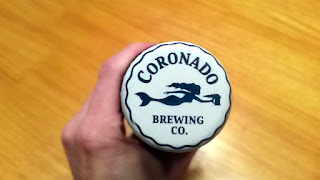 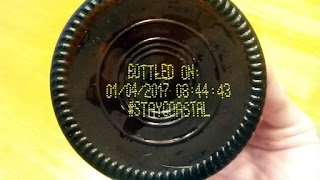 What's on the Bottle/Website: "This New England-style IPA is bursting with ripe, tropical juiciness. A hefty dose of Columbus, Centennial, Citra and Mosaic hops produce bright notes of mango, orange, and melon. British ale yeast accentuates the hop fruitiness and gives this unfiltered beer a dense, foggy haze like the coastal marine layer swallowing the north side of our island." Read more here!

Where distributed: As of May 2017, Coronado Brewing distributes to several U.S. states and ten other countries. Some of Coronado's beers can be found in Oregon and Washington, but I had to order North Island from California. See if Coronado ships to your area!

Taste (40%): The ripe tropical flavors are mainly relegated to the back end and aftertaste. Again, mainly orange, melon, and mango. No big-time bitterness here, typical of a New England-style IPA. Very easy drinking for 7.5%; you'll probably keep drinking it and not realize it's hitting you slowly. 4/5

Mouthfeel (10%): Medium-bodied, some carbonation. It has juicy qualities, but also slightly dry on the tongue. 4.25/5

Overall (20%): A great IPA. Naturally, I see New England-style IPA and I had to scoop this up to try. While this doesn't have the big-time flavor that many West Coast-style IPAs have, it's a pleasing tropical experience. This is a wonderful pick if you don't like the bitter, hoppy beers. I think this beer goes very well with spicy food. Decent price. 4/5