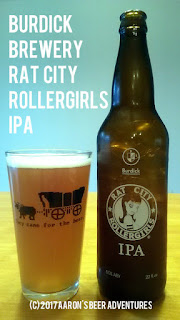 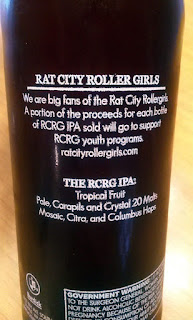 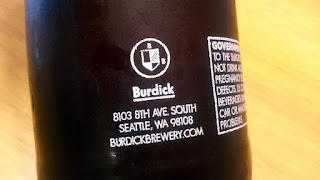 What's on the Bottle: "We are big fans of the Rat City Rollergirls. A portion of the proceeds of each bottle of RCRG IPA sold will go to support RCRG youth programs. ratcityrollergirls.com"

Where distributed: As of May 2017, Burdick Brewery only distributes their beer in Washington state. See if Burdick ships to your area!

Taste (40%): Basically a watered-down version of the aroma. Aftertaste is more citrus notes. Wish they brought a lot more flavor to this one. Come on, make me feel like I got KO'd by a roller derby girl! 3.5/5

Overall (20%): A good IPA. But frankly, I had higher hopes for this. For me, it lacked the punch that I wanted. Even at 6% ABV, I've had tastier beers that that ABV than this. While I wouldn't mind more ABV to this one as well, I would want a lot more tropical flavor injected into this. Not bad at the end of the day, but not my first choice. 3.75/5