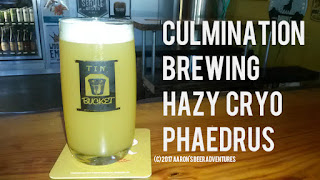 Where distributed: Culmination Brewing can be found in the Pacific Northwest. It slowly but surely has expanded throughout the Portland area.

Overall (20%): An excellent IPA. Culmination continues its use of cryo hops and brewed a hazy New England-style IPA version of their flagship Phaedrus a month or so after releasing the initial Cryo Phaedrus to Portland. A side of me wanted just a bit more tropical burst, but this was an overall success. As more hazy IPAs get released, it gets tougher to get to them all. I'll likely miss a bunch here and there, even in my own neck of the woods. Hazy Cryo Phaedrus was one I'm glad I got to. 4.25/5