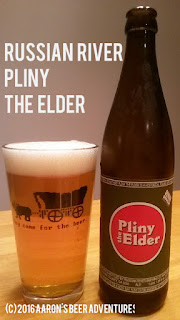 ****Re-reviewing this beer that I had last year. Click here for that review! 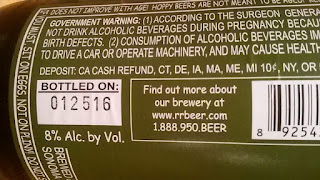 What's on the Label: "Pliny the Elder, born in 23 A.D., was a Roman naturalist, scholar, historian, traveler, officer, and writer. Pliny, and his contemporaries, created the original botanical name for hops, 'Lupus Salictarius' meaning 'wolf among scrubs'. Hop vines, at that time, grew wild among willows, likened to wolves roaming wild in the forest. Pliny the Elder died in 79 A.D. while saving people during the eruption of Mount Vesuvius. He was immortalized by his nephew, Pliny the Younger, who continued his uncle's legacy by documenting much of what his uncle experienced during the eruption of Mount Vesuvius. This beer is an homage to the man who discovered hops and perished while being a humanitarian.

"Respect your elder. Keep cold, drink fresh, do not age! Pliny the Elder is a historical figure, don't make this beer inside the bottle one! Not a barley wine, do not age! Age your cheese, not your Pliny! Respect hops, consume fresh! If you must, sit on eggs, not on Pliny! Do not save for a rainy day! Pliny is for savoring, not for saving! Consume Pliny fresh, or not at all! Does not improve with age! Hoppy beers are not meant to be aged! Keep away from heat!"

What's on the Website: Pliny the Elder is brewed with Amarillo, Centennial, CTZ, and Simcoe hops. It is well-balanced with malt, hops, and alcohol, slightly bitter with a fresh hop aroma of floral citrus, and pine. best enjoyed FRESH! That is why we make it in such limited supply. Actual bottling date is printed on each bottle!

"Where did we come up with this name? Back in the year 200l, our friend, Vic Kralj, who owns the Bistro in Hayward, California, decided to have his first ever Double IPA festival. Vic invited 10 breweries, 6 of whom (including us) had to brew something special for him since we had nothing that would fall under this style category. Vinnie had made a Double IPA at Blind Pig in 1994, but was not brewing one at Russian River Brewing at the time. He had an idea for the recipe, but not a name. After much research in the beer books, brainstorming, and deliberation, we came up with 'Pliny the Elder.' Pliny, the man, lived in the first century - 23 to 79 A.D. According to our brewing references, he and his contemporaries either created the botanical name or at least wrote about Lupus Salictarius, or hops, currently known as Humulus Lupulus. That was a very early reference to an important part of any Double IPA! Pliny the beer has now become one of our flagship brews!

"Pliny the Elder was immortalized by his nephew, Pliny the Younger, who wrote about his uncle succumbing to ash and smoke during the eruption of Mt. Vesuvius in 79 A.D. while rescuing people. Cheers to the scholar, historian, officer, writer, and Roman Naturalist - Pliny the Elder!" Read more here!

Where distributed: Russian River only ships its beers to a handful of states, preferring to keep their beers local. Bottles might be extremely hard to find outside California. Russian River currently has distributors in California, Oregon, Colorado, and Pennsylvania (usually just kegs to put the beer on tap).


REVIEW:
Appearance (5%): Verbatim from my previous review: "Poured into a pint glass. Incredible clear-golden color. A few millimeters of head. It's like the 'girl next door' attractiveness of beers." 5/5

Smell (25%): I get the tropical nature like last time (mostly orange and grapefruit), but it does not hit as intensely as other beers I have tried. It's still good, and while it may just be the particular batch, it's not as otherworldly as last time. 4.25/5

Taste (40%): Again, an outstanding, ridiculously drinkable beer that gives you good citrus and tropical upfront (i.e. orange and grapefruit) all the way through the aftertaste. Extremely dangerous and drinks like 5%. Bitterness does linger on the tongue. Again though, over the past year, I have enjoyed other beers a bit more, so this too has gotten knocked down a couple pegs -- but still amazing. 4.5/5

Overall (20%): An outstanding Double IPA. I revisited this beer for obvious reasons. After getting to experience over 100 different beers over the past year, did Pliny the Elder deserve the rating that I gave it last time? Ultimately, that was a no. However, I would also chalk it up to a more experienced palate, pure subjective preferences for beer, and perhaps obtaining a batch that may not have been near the quality I had last year. Make no mistake, Pliny the Elder is still a fantastic beer, but perhaps I can understand why other people have made claims of this being overhyped or not living up to said hype. 4.5/5