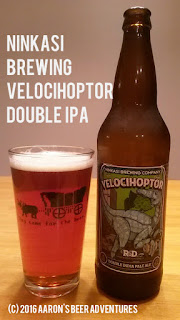 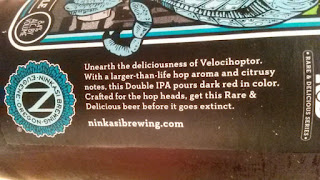 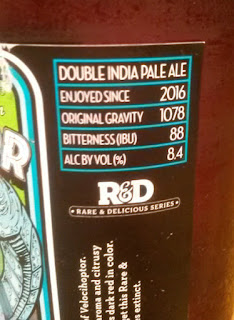 Where distributed: As of February 2016, Ninkasi Brewing ships to 14 states (includes the District of Columbia) and two Canadian provinces (British Columbia and Alberta). Click here for where Ninkasi ships its beer!

What's on the Bottle/Website: "Unearth the deliciousness of Velocihoptor. With a larger-than-life hop aroma and citrusy notes, this Double IPA pours dark red in color. Crafted for the hop heads, get this Rare & Delicious beer before it goes extinct." Read more here!

Taste (40%): Initially hoppy, dank, and slightly tropical. Very good balance throughout. The malt keeps the tropical nature in check very well. Sweet-fruity (akin to orange), with tropical grapefruit notes, malt, and a bit of dankness for much of the aftertaste. 4.25/5

Mouthfeel (10%): Medium body, quite refreshing, some carbonation. Bitterness remains but is held in check very well. 4.25/5

Overall (20%): A solid Double IPA. Another of Ninkasi's limited-release beers that I simply had to try for science. Here, I appreciated the balance that Velocihoptor brought, from the tropical to the malt to the dankness. It also drank very smoothly for being 8.4% ABV. The beer doesn't start smacking me in the face until I've poured my next glass. Frankly, by that point, you know I'm consuming the rest in one sitting. I thought Ninkasi did a wonderful job on this one. And as a bonus, Velociraptors are cool when they consume hops. 4.25/5