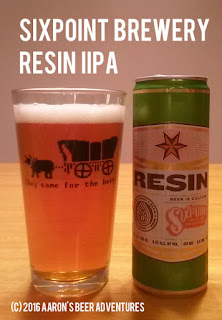 Where distributed: Sixpoint Brewery ships to several states. Check to see if Sixpoint ships to your area!

What's on the Can: "...RESIN is not about fearing the mysterious and potent force of the hop cone, it;s about embracing it. Feel it coat your tongue, tango with the malt, and slap some bitter sense into you. Yes, it stings, but feels so good at the same time. Now that's Mad Science." 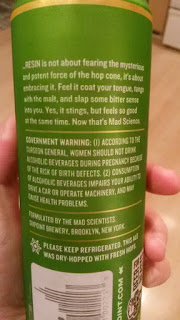 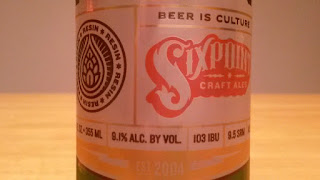 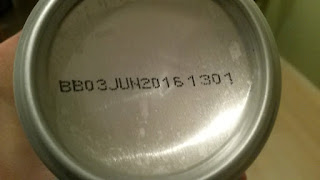 What's on the Website: "Resin is an ode to the sticky quintessence of hops - we extracted the alluring nectar from every precious citrus, pine, dank and herbal cone and channeled it all into one vessel. Now that's Mad Science." Read more here!


REVIEW:
Appearance (5%): Pours a clear golden-orange into a pint glass with a few millimeters of off-white head. No lacing remains on the glass. 4.25/5

Smell (25%): Malt-forward and tropical-hop aroma. Getting mostly pineapple and grapefruit. 4.25/5

Taste (40%): Malty to start, with a tropical pineapple burst erupting afterward. Very dank, bready, and a controlled bitter aftertaste. Alcohol detected. Very hoppy beer that flexes its 103 IBU muscle for a few seconds after the sip. 4/5

Overall (20%): A solid Double IPA. Another of the four core Sixpoint beers, Resin showcases every bit of its 103 IBUs and is clearly stronger in alcohol and dankness than Bengali or Global Warmer. Frankly, I enjoyed this more when it was on draft at a local bar. Resin is still a solid beer, especially when remembering that it is 9.1% ABV, but on most days, I will still prefer having Bengali or Global Warmer over this. 4.25/5