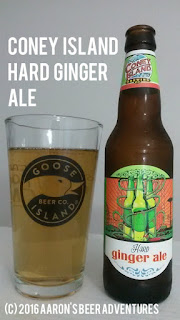 What's on the Bottle: "Feast your eyes on Coney Island Hard Ginger Ale: a tantalizing libation enhanced with West African ginger. Are you tall enough to ride?"

What's on the Website: "What we have behind the curtain will amaze you! Astound you! Astonish you! Hailing from deep in the ground in a far off land comes an ingredient so fragrant and so delightful that a single sip will wash away your worries like waves crashing on sunny shores. Feast your eyes on Coney Island Hard Ginger Ale: a tantalizing libation enhanced with West African ginger. Are you tall enough to ride?" Read more here!


REVIEW:
Appearance (5%): Pours a light golden into a pint glass. Extremely carbonated and fizzy that reduces to a slightly sudsy surface. Basically pours like a soda. 3.75/5

Smell (25%): Immediate ginger ale aroma, almost like a mix of ginger ale and Sprite at times. Again will smell much sweeter than it will taste. 4.25/5

Taste (40%): A respectable jolt of ginger right after taking the sip. The alcohol is noticeable towards the aftertaste and faintly lingers after swallowing. Sweetness is kept to a minimum. I love a good ginger ale, but the alcoholic presence, combined with the drink's restrictive sweetness, did not leave a good taste in my mouth. 2.75/5

Overall (20%): A fair hard soda. I have clearly not had much success with the Coney Island hard sodas, but felt it was necessary to try the ones available to see if the product is off, or if the entire line may not be for me. After all, you may find a gem or two in murky waters. On the smell and initial sip, I thought that this would be the least offensive of the three Coney Island hard sodas. After taking a few more sips here, however, the taste got more medicinal and less favorable. Not sure if I will be buying many more Coney drinks from now on, but never say never. 2.5/5