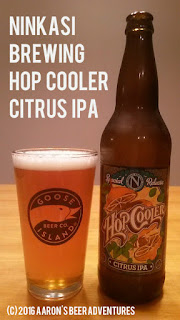 Where distributed: As of February 2016, Ninkasi Brewing ships to 14 states (includes the District of Columbia) and two Canadian provinces (British Columbia and Alberta). Click here for where Ninkasi ships its beer! 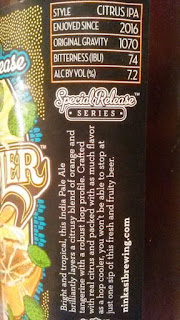 What's on the Bottle/Website: "Bright and tropical, this India Pale Ale brilliantly layers a citrusy blend of orange and tangerine with a robust hop profile. Crafted with real citrus and packed with as much flavor as a hop cooler, you won't be able to stop at just one sip of this fresh and fruity beer." Read more here!


REVIEW:
Appearance (5%): Poured slightly hazy orange-golden into a pint glass. A couple millimeters of off-white head. Unfiltered beer, with particles of sediment suspended throughout the beer. A bit of lacing remained on the glass. 4.25/5

Taste (40%): Tropical-hoppy burst of flavors combined with some malt and more subtle herbal notes. Some alcohol detected after drinking half of the beer in the pint glass. Sweet citrus flavors combine harmoniously with the malt and hop-bitterness. The additional sweetness from the honey works here. Solid. 4/5

Mouthfeel (10%): Approximately medium body but very refreshing. Not a lot of carbonation. Still coats the tongue in a silky way. 4/5

Overall (20%): A solid IPA. This Special Release from Ninkasi will be seen on shelves for the first half of 2016. The company's description is spot-on: a big burst of hops and all-around tropical experience. I love that they used real fruit peel to leave that added bitterness punch in the mouth. Excellent choice of hops (especially Citra and Simcoe). A damn good deal on the price. I'd be quite happy if someone got me another pint of this to enjoy. 4/5