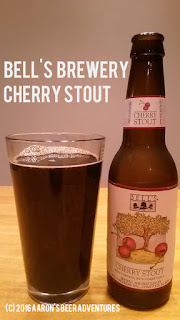 What's on the Bottle: "A mysterious dance of tart Michigan cherries with the dark, roasted malts of a big and bold stout." 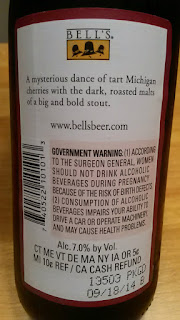 What's on the Website: "Tinted ruby-black, Cherry Stout gains its signature tartness from 100% Montmorency cherries grown in Michigan's Traverse City region. Rather than doubling up on sweetness, this tart cherry varietal serves as a counterpoint to the warm, dark chocolate notes from the malt bill. Lightly hopped for balance, this stout is one of the cornerstones of the Bell's stout portfolio." Read more here!

Where distributed: As of February 2016, Bell's Brewery ships to 23 states and the District of Columbia. On the West Coast, it can only be found in Southern California and Arizona. Once in a blue moon, Bell's has shipped to Portland, Oregon (once for Craft Brewers Conference Week in April 2015 and one large shipment in February 2016). See if Bell's ships to your area!

Taste (40%): Good balance of tart, chocolaty, malty, and slightly bitter. Tartness hits one more time on the aftertaste and sticks around in a mellow manner. Has all the elements of a good stout, plus the signature cherry tartness. 3.5/5

Mouthfeel (10%): Medium-full bodied. Has a syrupy, velvety feel on the tongue. Still wields some carbonation after being bottled for a year and a half. 3.75/5

Overall (20%): A good stout. Since I had bought two of these, I figured I would drink one now to finally see what it tastes like. The Bell's site notes that this beer has a shelf life of 12 months, so I erred in not drinking this within that one-year window. At least I opened it during a winter month, I guess. I still prefer the IPAs from Bell's, but this is still solid enough that I can happily drink the entire bottle. 3.5/5