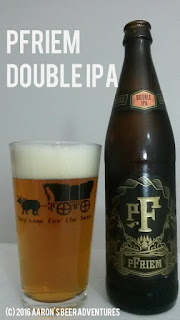 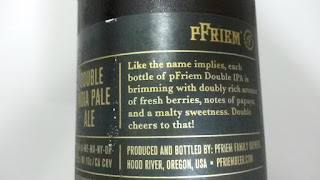 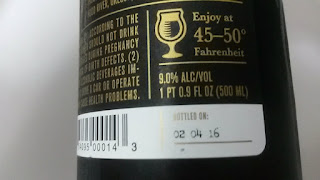 What's on the Label: "Like the name implies, each bottle of pFriem Double IPA is brimming with doubly rich aromas of fresh berries, notes of papaya, and a malty sweetness. Double cheers to that!"

What's on the Website: "Just like the name implies, brewing a batch of pFriem Double IPA takes twice the regular amount of malt and hops. That means each pint is brimming with doubly rich aromas of fresh berries, notes of papaya and a malty sweetness. Just make sure to raise your glasses twice because a beer like this deserves a double cheers." Read more here!

When brewed? Winter seasonal for bottles and draft. Part of their "Classic" line of beers.

Where distributed: As of February 2016, pFriem currently ships within the Pacific Northwest, to my knowledge.

Taste (40%): A punch of tropical fruit and slight malt upfront, which continues into the aftertaste. It never gets too malty or too fruity, staying nicely balanced. Extremely drinkable and well worth the buy. 4.75/5

Mouthfeel (10%): Medium-bodied with some carbonation. Some tropical-hop bitterness on the tongue, but again, not overpowering and is actually awesome. 4.75/5

Overall (20%): A world-class Double IPA. Just several weeks ago, pFriem was named Oregon's Brewery of the Year at the 2016 Oregon Beer Awards, and I can see why. Several of their beers have won coveted awards, and this Double IPA took home a bronze medal at the same awards event. I am also a fan of their single IPA, which can also be found in stores around here. This 9% beer drinks more like a 5.5% beer, with aromatics and flavors akin to the famous Pliny the Elder. In short, we have a kickass beer here. I easily see pFriem taking home many more awards for years to come. 4.75/5