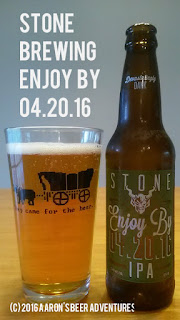 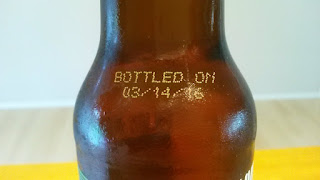 What's on the Label: "You have in your hands a devastatingly fresh double IPA. Freshness is a key component of many beers -- especially big, hoppy IPAs -- but we've taken it further, a lot further, with this one. We brewed this IPA specifically NOT to last. We've gone to extensive lengths to ensure you get your hands on this beer within an extraordinarily short window, and we've sent a very clear message in the name of the beer itself that there is no better time than right NOW to enjoy this IPA!" 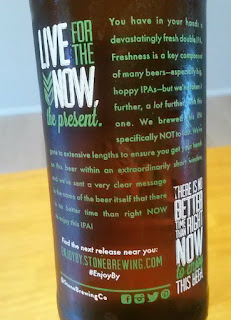 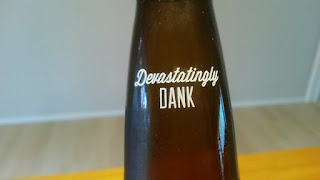 What's on the Website: "This is our own celebration of resinous green buds: Besides brewing this intense double IPA with more than 10 different hops, we hop-burst and dry-hop the beer to amp up its peach and tropical fruit notes and overall hop factor. Brewed specifically NOT to last, this devastatingly dank, golden beauty should be enjoyed by fellow hopheads within 37 days." Read more here!

Where distributed: Stone Brewing has shipped this beer to most U.S. states. Check to see whether this beer can be found in your area!


REVIEW:
Appearance (5%): Poured clear golden into a pint glass. Good carbonation with just a bit of white head; sudsy surface. Some lacing on the glass. 4.25/5

Smell (25%): Combination of hoppy, piney, and slight tropical aroma (getting mostly pineapple and grapefruit. To me, not as aromatic as some of these that I've had in the past. 4/5

Taste (40%): For the first half of the glass, it was mostly a bitter, alcoholic, and dank experience upfront. Most of the tropical flavors (which I finally get more towards the aftertaste) were getting drowned out as a result. For the last half of the glass, things mellowed out considerably and I got more tropical notes. At the end of the day, it's good, but far from their best. 3.75/5

Overall (20%): An above-average Double IPA. While it's the same ABV as prior "Enjoy By" releases that I've had, this one clearly had the most kick. To be fair, it mellowed out after I drank about half of the beer. It's drinkable, but with the high standards I've placed on this company (after enjoying several outstanding brews from them), this one is far from their best. This beer basically sums up what a West Coast IPA is (tons of hops, bitter) while adding more dank, alcoholic punch. In doing so, however, the refreshing aspect was mostly lost -- at least for the first half. 3.75/5