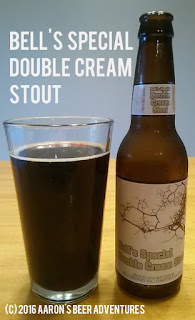 What's on the Bottle: "Brewed with a blend of 10 different malts, Double Cream is an incredibly rich stout composed of dark, sweet and smooth tones intermingled with a soft, roasty finish." 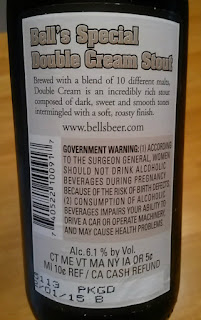 What's on the Website: "Special Double Cream Stout derives its name from its smooth, creamy texture, not the ingredients. Completely dairy-free, this stout blends ten different specialty malts to yield a remarkable depth of flavor. With only a touch of burnt notes, Special Double Cream Stout focuses on the softer, cocoa & espresso-like aspects of roasted malt." Read more here!

Where distributed: As of February 2016, Bell's Brewery ships to 23 states and the District of Columbia. On the West Coast, it can only be found in Southern California and Arizona. Once in a blue moon, Bell's has shipped to Portland, Oregon (once for Craft Brewers Conference Week in April 2015 and one large shipment in February 2016). See if Bell's ships to your area!

Taste (40%): Roasted, almost-burnt coffee notes with chocolate. Slightly bitter. Almost seems a tad watered down when leading up to the aftertaste. 3.5/5

Mouthfeel (10%): Medium to medium-full bodied. Fairly carbonated. Has that creamy feel on the tongue but a tad watered down. 3.75/5

Overall (20%): A good stout. With that recommended 12-month lifespan noted above, it looks like I just missed that cutoff date. Still, we received this beer after said date anyway, so chances are it really would not have mattered. The beer is fine for what it is, but to me had more of that watered-down flavor and feel. I would have loved this beer to bring a bit more to the table. 3.5/5