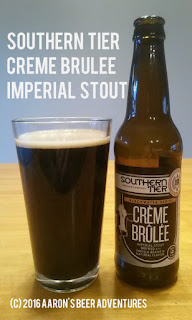 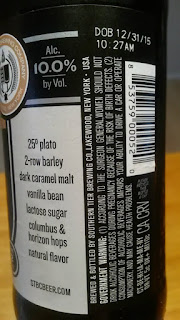 What's on the Website: "How, you may ask, would a brewery determine a likeness to hard-coated custard? Our response is simple; it's all in the power of history, and of course the extra finesse needed to top off a contentious threat with definition.

"By comprehending the labyrinthine movement of time, one would not think it strange to trace the errant path of an ordinary object such as a cream dessert only to discover that it has been the cause of cultural disputes since the middle ages. The British founders of burnt cream and from Spain, crema catalana, both stand by their creative originality and we respect that, but it was the French Creme Brulee, amid the strife of contention, that survived to represent our deliciously creamy brew!" Read more here!

Food Pairings: Southern Tier suggests that this can be its own dessert. But if you must, pair it with some vanilla custard, bananas foster, or over vanilla ice cream.

Smell (25%): Intense malty caramel and sweet vanilla with the hint of coffee. Exactly what it should be. Rich even on aromatics. 4.75/5

Taste (40%): Rich coffee, malty caramel, and creamy vanilla with controlled bitterness. Full of flavor from start to finish. A bit of alcohol detected, although not surprising when seeing it is 10%. 4.25/5

Overall (20%): A great Imperial Stout. This is probably one of the more ideal dessert beers out there; just filled with pleasing aromas and, as the website states, could really be dessert on its own. However, I balked when seeing that it was nearly $6.00 for one 12 oz. single. Belmont Station generally is on the higher end of prices in the area, but still, that might make me think twice before getting it. If I recall correctly, I remember paying about $9.00 for a 22 oz. bottle a couple of years ago. Definitely one to share with a good friend or a loved one. 4/5