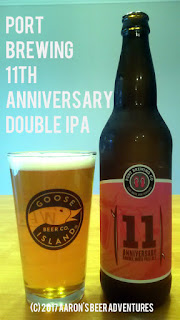 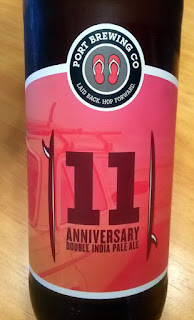 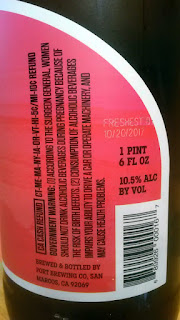 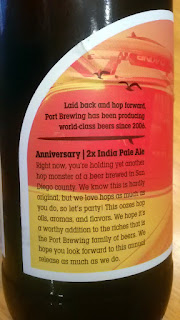 What's on the Bottle: "Right now, you're holding yet another hop monster of a beer brewed in San Diego county. We know this is hardly original, but we love hops just as much as you do, so let's party! This oozes hop oils, aromas, and flavors. We hope it's a worthy addition to the riches that is the Port Brewing family of beers. We hope you look forward to this annual release as much as we do."

What's on the Website: "Using Columbus, Amarillo and Simcoe hops and dry-hopping with Columbus, Amarillo and Citra, Anniversary Ale has an intensely hoppy body with fresh tones of pine and citrus. A seasonal release that will satisfy any hop-head who has the pleasure to try it. In addition, we don’t want to make people “wait in line” to try an amazing IPA, so we also bottle it!" Read more here!

Smell (25%): Tropical hoppy pine, grapefruit, and citrus peel. Complementing malt. Impressive that there was no octane for 10.5%. 4.5/5

Taste (40%): Follows the nose. Some octane in the middle of the drinking experience, with hoppy, bitter, and dank notes through the aftertaste. Citrus peel on the aftertaste. Still fairly impressive, considering it is 10.5%. Lovely flavor. 4.5/5

Mouthfeel (10%): Medium-bodied; some carbonation. Slightly dry tongue, citrus bitterness lingers in a good way (for me). 4.5/5

Overall (20%): An outstanding IPA. I left this in my fridge for a couple months being sidetracked with other beers, but this was worth the wait. Typical, reasonable price for a 22 oz bomber. The alcohol eventually will get to you, so drink responsibly, my friends. Port Brewing has a wonderful Anniversary Double IPA! 4.5/5