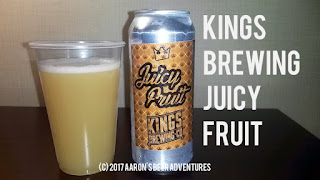 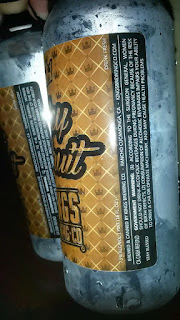 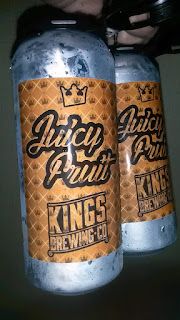 Commercial Description (from Facebook): "Tangerine, apricot, honeydew melon, gooseberry, peach, pineapple, kiwi, blueberry, papaya, bubblegum and tropical fruits explode both in aroma and taste. Juicy Fruit is all you get out of this 100% transformed N/E style IPA."

Where distributed: As of July 2017, Kings Brewing beers are only distributed in Southern California. Click here to see where outside of the brewery!

Overall (20%): An outstanding IPA. Kings Brewing scores yet again with one of their limited-time New England-style IPA releases. They tend to have at least a couple of NE Style IPAs on draft at all times, and I've seen up to four at once on the draft board. I prefer Juicy Fruit over Juice Bomb due to the more complex tropical flavors I get from the former. A bit on the pricey side with the 4-pack, but worth it for the limited availability and great taste. 4.25/5