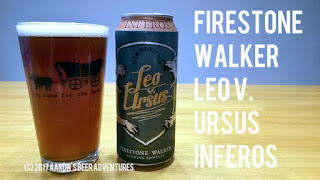 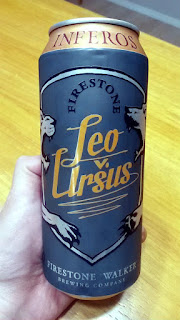 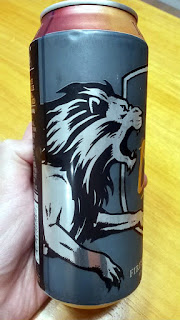 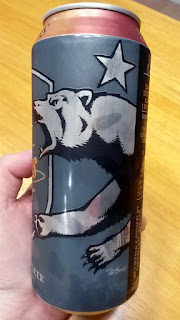 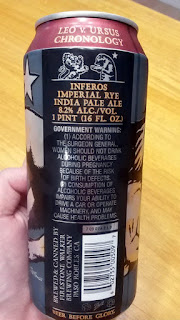 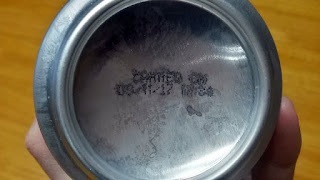 When brewed? Limited-time beer (September 2017 to December 2017). Part of the Leo v. Ursus Chronology Series. This is the third beer in the series. Best enjoyed 120 days from canning date.

What's on the Website: "Inferos is a rye imperial IPA that is fiery in color, hellacious in hoppiness and bursting with spicy rye goodness. Forged with 25 percent rye grain and loaded with more than four pounds of hops per barrel, Inferos is ultimately a big, lively beer that will keep the soul warm as summer transitions to fall. The malt bill on Inferos features ESB as a base and Carafa for color, with a devilish dose of rye. “Rye is known for its spicy, rustic grain characteristic, and I think it really adds a distinctive personality to this beer,” says Brewmaster Matt Brynildson. Inferos is massively dry hopped with Galaxy and other Southern Hemisphere hops to ratchet up the intensity scale. “We’ve long been excited about this idea of brewing a heavily rye-infused beer, and then just hopping the hell out of it,” Matt says. “We finally got our chance.” Read more here!

Where distributed: Inferos is released for a limited time. It reached the Pacific NW in September 2017. Find out if it got shipped to your area!

Taste (40%): Grapefruit and some pineapple, with complementing biscuity and slight malt. Aftertaste has some malt with citrus peel and grapefruit. Flavor from start to finish. I'm a fan. 4.5/5

Overall (20%): An excellent to outstanding IPA. To me, the best beer in the series so far; good tropical experience here and lots of flavor. Same price as the previous beers in the series. Looking forward to the next one! 4.5/5