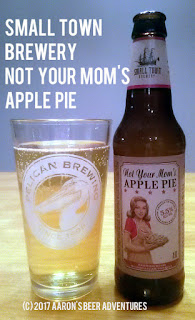 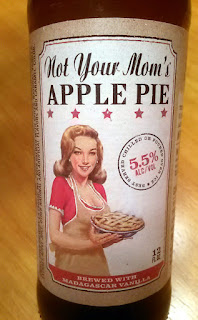 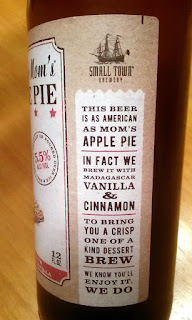 What's on the Bottle: "This beer is as American as Mom's Apple Pie. In fact we brew it with Madagascar vanilla & cinnamon to bring you a crisp one of a kind dessert brew. We know you'll enjoy it. We do."

Taste (40%): Vanilla and cinnamon right from the start -- then it tends to fade off into a whimper of what I wanted it to be. It's a mellow apple pie-like experience, but I wanted a more in-your-face intensity like I got with just about every hard soda they've brought to date. 3.5/5

Overall (20%): A good hard soda. I had fairly high expectations for this one, and while the aroma raised my hopes, the taste left something to be desired. I think Small Town Brewery should have gone a bit higher on the ABV with more apple flavor. At the end of the day, this was just another alcoholic beverage that did not stand out from the pack. 3.75/5