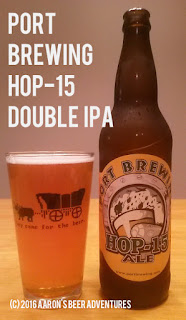 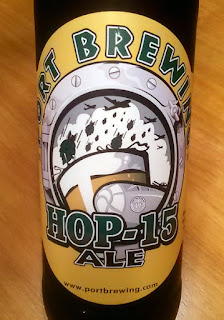 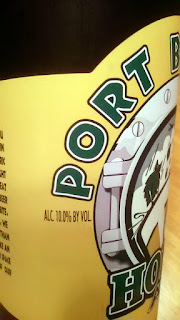 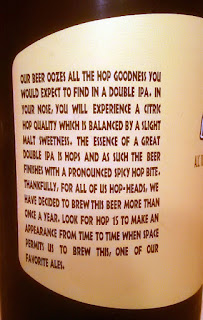 What's on the Bottle: "Our beer oozes all the hop goodness you would expect to find in a Double IPA. In your nose, you will experience a citric hop quality which is balanced by a light malt sweetness. The essence of a great Double IPA is hops and as such the beer finishes with a pronounced spicy hop bite. Thankfully, for all of us hop-heads, we have decided to brew this beer more than once a year. Look for Hop 15 to make an appearance from time to time when space permits us to brew this, one of our favorite ales."

What's on the Website: "Our seasonal Double IPA, Hop 15 has a blend of 15 different domestic and imported varieties of hops added every 15 minutes. Huge fresh hop resins with pine and citric aromas countered with notes of malt character. Winner of two silvers at the Great American Beer Festival as well as many other awards, Hop 15 remains one of our most sought after beer." Read more here!

Where distributed: As of November 2016, Port Brewing distributes to nine U.S. states, including Washington state. See if Port Brewing ships to your area!

Taste (40%): More dank and octane at the start, lots of bitter hoppiness throughout. Getting more of the citrus-tangerine on the extreme back end. Certainly tastes like a 10% beer but quite delightful. 4.25/5

Mouthfeel (10%): Medium-full bodied, some carbonation. Syrupy coat on the tongue which morphs into a dry tongue after a few seconds. 4.25/5

Overall (20%): An excellent IPA. Giving this one a slightly higher weighted rating than the Mongo Double IPA I reviewed about 14 months ago, mainly for the amazing aroma and nice hop-bitter flavors in this 10% beer. Decent price at $7.49. This is a beer I would recommend to all Double IPA lovers. 4.25/5