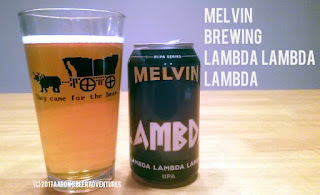 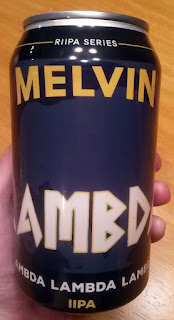 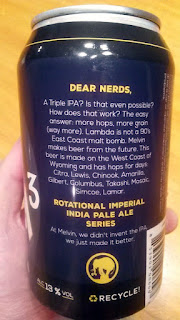 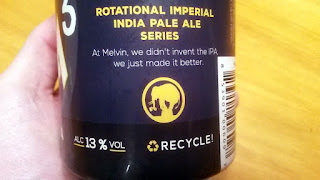 What's on the Can: "Dear Nerds, A Triple IPA? Is that even possible? How does that work? The easy answer: more hops, more grain (way more). Lambda is not a 90's East Coast malt bomb. Melvin makes beer from the future. This beer is made on the West Coast of Wyoming and has hops for days: Citra, Lewis, Chinook, Amarillo, Gilbert, Columbus, Takashi, Mosaic, Simcoe, Lamar."

What's on the Website: "The crew at Melvin decided to push their system to the max on all levels. Brewed with 4 plus lbs of Simcoe and Mosaic hops per barrel then double dry hopped. Flavors of peach, stone fruit and herbal forest. Sure to put you in the gravel pit." Read more here!

When brewed? Seasonal beer, part of their RIIPA (Rotational Imperial IPA) series. Lambda is available in Washington from October through December, and available in Oregon from January through March. See their release calendar here!

Where distributed: As of February 2017, Melvin Brewing beers can be found in six states (CO, ID, OR, UT, WA, and WY). Melvin is also found on draft in British Columbia, and will be in Vermont in the future. Check to see whether Melvin Brewing is in your area!

Smell (25%): Tons of tropical, citrus, and pine. Dank. Complementing malt. The aroma alone is dangerous. No way anyone could say this is 13% based off the aroma. 4.75/5

Taste (40%): Blast of tropical hop and dank citrus at the front. The sweet malt and octane hit right after, but again, it drinks far easier than any 13% Triple IPA I've previously had. More citrus and tropical on the aftertaste. Don't worry, you'll feel the 13% much later. 4.25/5

Overall (20%): An excellent Triple IPA. I've long been a fan of Melvin Brewing, but even they boggled my mind with this one. Sure, I'll feel the chest warmth and the octane from this one, but how they make this so drinkable, I'll never know. Of course, I'd easily pick the Melvin IPA and the 2x4 Double IPA over this (for everyday drinking), but this is mighty impressive. 4.25/5