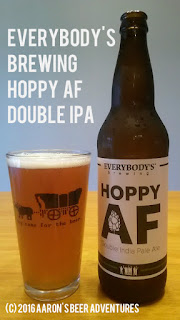 When brewed? Seasonal beer. Part of their "Tiny Tank" series. Released for the first time in bottles in May 2016 (previously just on draft).

What's on the Bottle: "This Double IPA is light colored and juicy! With massive amounts of Galaxy, Citra, and Chinook hops in both the whirlpool and fermenter, the aroma and flavors are definitely Hoppy AF!"

Taste (40%): Dank, malty, and citrusy, yet smooth and very drinkable. Juicy. Little to no alcohol detected. A sweet malty aftertaste with some orange and tangerine in there. 4.25/5

Mouthfeel (10%): Medium-full bodied, syrupy and sticky on the tongue with pleasing citrus bitterness. 4.25/5

Overall (20%): An awesome Double IPA. A nice first experience with Everybody's Brewing, thanks to an article I read on New School Beer. For me, 7.5% ABV and 85 IBUs are right around the ideal specs for a Double IPA. This one had the right amount of punch, flavor, and overall tropical feel to make me a fan.  4.25/5