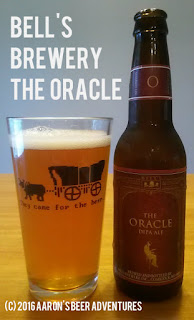 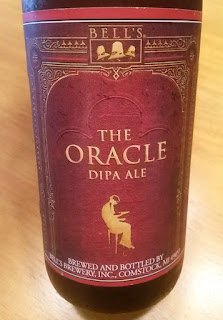 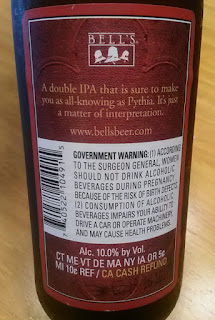 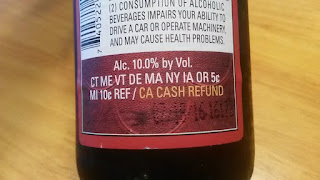 What's on the Bottle: "A double IPA that is sure to make you as all-knowing Pythia. It's just a matter of interpretation."

What's on the Website: "Our take on the West Coast-style Double India Pale Ale, The Oracle places hop intensity first and foremost, making only the slightest concession to malt and balance. The fireworks start with the aromatic punch of dry-hop sessions with hop varieties from the Pacific Northwest. Resinous, citrusy hop flavors mixed with aggressive bitterness from a massive kettle deliver on that aromatic promise." Read more here!

Where distributed: As of August 2016, Bell's Brewery ships to 23 states and the District of Columbia. On the West Coast, it can only be found in Southern California and Arizona. Every so often, Bell's will ship to Portland (Oregon) for special events. See if Bell's ships to your area!

Taste (40%): Malt and dank forward. Controlled bitterness at the start, then malt and tropical sweetness hit midway through. Lovely orange-citrus on the aftertaste that makes me want to keep drinking. Layers of flavor and very tasty. Noticeable octane that fits the 10% ABV description. 4.5/5

Overall (20%): An excellent IPA. I initially got a huge blast of octane and bitterness that was off-putting, but the more I drank this beer, the more I ended up liking it. Bell's has produced a couple of IPAs that I am a fan of, and thanks to an event during PDX Beer Week in June 2016, I was able to enjoy a few more. The Oracle is on the pricier side at $3.49 per 12 oz bottle, but it is a solid recommendation for any Double IPA lover. 4.25/5