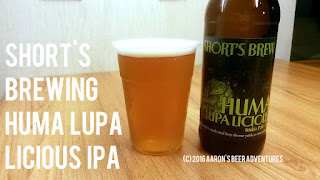 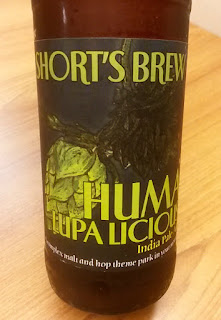 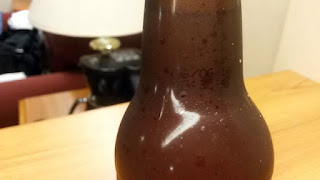 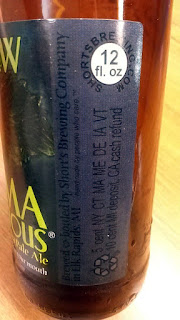 What's on the Website: "Huma Lupa Licious' name derives from the hop plant, Humulus lupulus. It is brewed with five different hop varieties, Centennial, Columbus, Chinook, Cascade, and Palisade. Huma is known for having an intense bitterness that is balanced by a rich malty flavor. A citrus and floral aroma complements the unique qualities of Short's flagship India Pale Ale.

Where distributed: Short's Brewing had stayed exclusive to Michigan for years before expanding to Indiana and Ohio in March 2016. See if Short's ships to your area!

Taste (40%): Malt and floral-forward, very predominant. Some grapefruit bitterness on the back end. As the beer warms up a bit more (cool not close to ice cold), it gets more balanced. Lots of hop bitterness, would have thought this was over 100 IBUs. 4.25/5

Overall (20%): An awesome IPA. I enjoyed the excess hoppiness this one brings. I enjoyed this way more after letting the beer warm up a bit; it got more balanced as opposed to simply having hoppy, floral, and malty blast hit the tongue. Since we don't get Short's Brewing beers in the Pacific NW at this time, this was a must-try for me while in Michigan. While my preference is for a bigger tropical presence, this is more the IPA style I will get in the Midwest, and it's a good one. A decent buy at about $2 for a 12 oz. single. Nice to get a taste of Michigan beer while in the state. 4.25/5