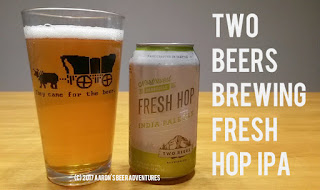 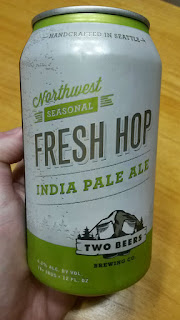 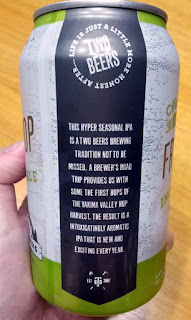 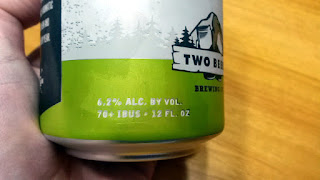 What's on the Can: "This hyper seasonal IPA is a Two Beers Brewing tradition not to be missed. A brewer's road  trip provides us with some (of) the first hops of the Yakima Valley hop harvest. The result is an intoxicatingly aromatic IPA that is new and exciting every year."

What's on the Website: "Brewed once a year, this award-winning Fresh Hop IPA features first of the season Centennial hops from the Yakima Valley. Bright and juicy with an enticing aroma of fresh hops, this limited edition beer is a Two Beers Brewing tradition available only for a short time." Read more here!

Where distributed: As of January 2018, Two Beers Brewing distributes to the Pacific NW.

Overall (20%): An excellent IPA. Hops here included Amarillo, Citra, Cascade, and whole-cone Centennial fresh hops. I had their regular IPA at a 2016 Seahawks game, which I found OK, but the Fresh Hop IPA blows that out of the water. The lovely tropical here, with just the right amount of hoppy and malt characters, give this two thumbs up from me. Knowing that the hop profile can change every year makes this a truly unique beer. Plus, it is a relatively cheap option, compared to other beers I've had. 4.5/5