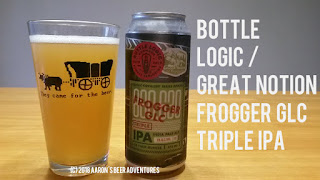 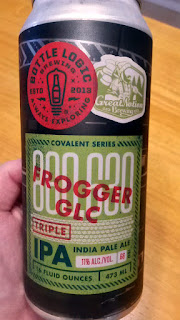 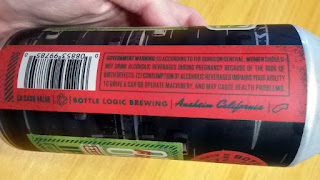 Commercial Description: "An ode to the golden age of arcade games and sitcoms about nothing, Frogger GLC is an 11% epic of a New England Style Triple IPA packed with Mosaic, Citra, and Galaxy hops for bold notes of overripe tropical fruit and bittersweet orange peel."

Where distributed: As of March 2018, Bottle Logic Brewing beers are found in Southern California and the Bay Area. Click here to see where!

Taste (40%): Octane-forward, which goes away after a couple seconds and leaves a orange or tangerine-citrus aftertaste. Not much bitterness. 4/5

Overall (20%): A solid to awesome IPA. It was great that Bottle Logic collabed with Great Notion, but I could not recall seeing Frogger GLC on tap anywhere in the area. Unless Great Notion quietly tapped their keg, I didn't see anyone else in Portland get one. Frogger fits the bill of a solid NE-Style Triple IPA; boozy but finishes with pleasant tropical. I've had other Triple IPAs that don't hit as hard on the octane (so I wouldn't put this in the upper echelon of TIPAs), but frankly, it's what one should otherwise expect from an 11% beer. I'm glad I'm drinking this all at home, that's for sure. 4/5