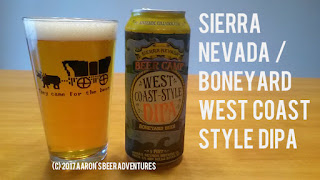 Beer Name: West Coast Style DIPA
Brewery: Sierra Nevada Brewing Co. (Chico, CA; Mills River, NC); in collaboration with Boneyard Beer (Bend, OR)
ABV: 8.3%
How sold: Only sold in 16 oz can as part of a 12-pack Across the World Beer Camp series.
Where bought: Craft Shack (San Diego, CA)  ****bought online
Price: $29.99 for 12-pack (could not buy just this beer; had to get the entire 12-pack) 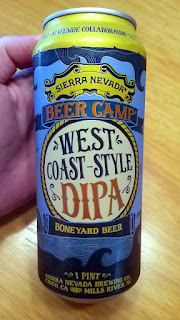 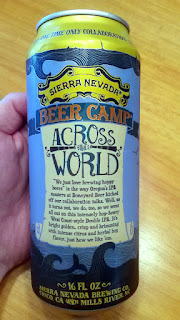 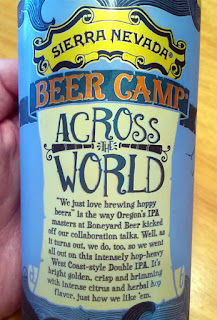 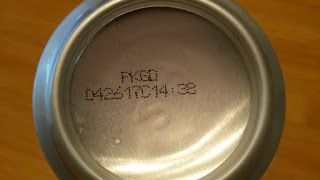 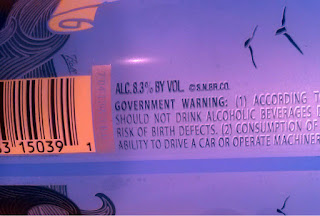 What's on the Can: "'We just love brewing hoppy beers' is the way Oregon's IPA masters at Boneyard Beer kicked off our collaboration talks. We, as it turns out, we do, too, so we went all out on this intensely hop-heavy West Coast-style Double IPA. It's bright golden, crisp and brimming with intense citrus and herbal hop flavor, just how we like 'em."

What's on the Website: "It was a given that when Sierra Nevada and Boneyard join forces to make a beer, you’re gonna get some type of an IPA. Together we’re brewing an intense West Coast-Style Double IPA heavy with the classic hop character that defines both our beers. It features Mosaic, Simcoe, Centennial and Citra hops in ridiculous amounts, sure to please the hopheads within us all." Read more here!

Where distributed: Sierra Nevada ships to many states. This particular beer may be more limited in distribution. Check their full distributor list!

Smell (25%): Predominantly hoppy pine and citrus, with complementing malt and some herbal/floral notes. 4.25/5

Taste (40%): Hop-forward and slight dank to start, more pine and slight herbal in the middle, finishing with citrus and grapefruit. There is a bit of octane and dankness in this one that threw the flavor just a bit off course for my liking. Still good, and typical lingering bitterness of a West Coast-style IPA. 4/5

Overall (20%): An excellent IPA. The assertive hop profile fits the West Coast-style and NW IPA style of beers. In Oregon, you can never go wrong with Boneyard; it has been a heavy hitter for beer around here for a while. For this DIPA collab, it was an overall success, but admittedly, I prefer the easier drinking East Meets West collab with Tree House Brewing. It certainly drank more bitter than its stated 65 IBUs. I now tend to gravitate more toward the tropical beers (with a few exceptions), but Sierra's West Coast Style IPA is a very good option that I'll gladly drink. 4/5