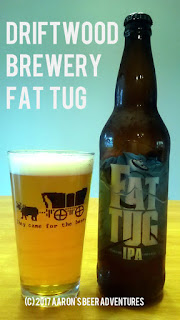 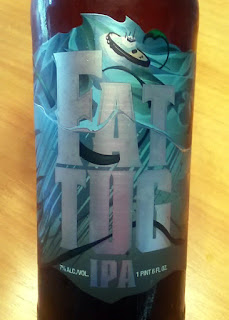 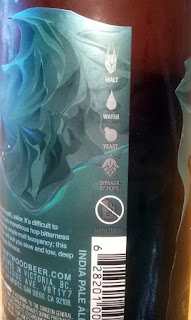 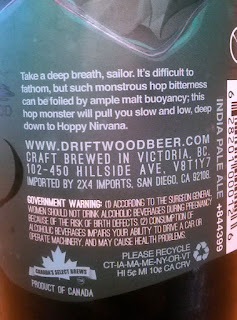 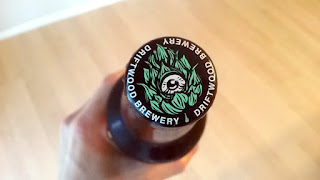 What's on the Bottle: "Take a deep breath, sailor. It's difficult to fathom, but such monstrous hop bitterness can be foiled by ample malt buoyancy; this hop monster will pull you slow and low, deep down to Hoppy Nirvana."

What's on the Website: "Brewed with the hop aficionado in mind! Fat Tug is a northwest style India Pale Ale with an intense hop profile with notes of grapefruit, mango, melon and passion fruit. Sufficient malt is there to provide support. At 7% alc/vol and 80+ IBUs this beer delivers on the promise to satisfy anyone with a thirst for all things hoppy!"  Click here for more!

Where distributed: Driftwood Brewery distributes to the Canadian provinces of British Columbia and Alberta. In mid-April, Driftwood did a special release in Portland, OR. It is unknown if they will continue to ship to the area.

Taste (40%): Barrage of tropical citrus and grapefruit from start to finish, even on the aftertaste. Controlled bitterness lingers. Still a masterpiece. 5/5

Mouthfeel (10%): Medium-bodied; some carbonation. A mix of juicy and controlled bitterness, but the tongue only gets slightly dry. Simply satisfying. 4.75/5

Overall (20%): A world-class IPA. It's been about 22 months since I first had this beer (maybe 19 months since my initial review on this blog), and Fat Tug is still kicking major ass. A few months ago, Driftwood came to the Pacific NW to drop off a good-sized shipment, and I couldn't be happier. Fat Tug is in that rarefied tier of beers I will start guzzling without even thinking, and before I know it, the glass and bottle are empty. It may also be cheaper if you get it in Vancouver, BC. For people who love Ballast Point's Sculpin IPA and Unfiltered Sculpin IPA, you will love this, too. Fat Tug is an elite beer on my list. 5/5