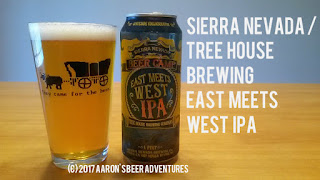 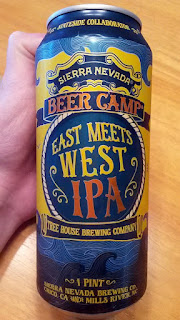 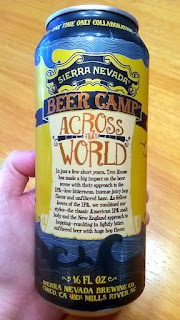 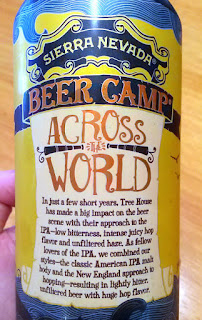 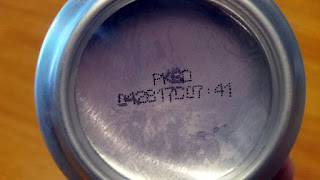 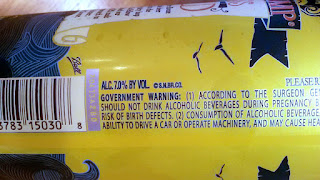 What's on the Can: "In just a few short years, Tree House Brewing has made a big impact on the beer scene with their approach to the IPA - low bitterness, intense juicy hop flavor and unfiltered haze. As fellow lovers of the IPA, we combined our styles - the classic American IPA malt body and the New England approach to hopping - resulting in lightly bitter unfiltered beer with huge hop flavor."

What's on the Website: "An IPA, of course. We're blending our two approaches to the IPA in this East Meets West IPA. Sierra Nevada’s malt body and profile was blended with the heavy-handed, very late hopping schedule employed by Tree House to create a new, hybrid IPA. Lightly bitter and heavy with citrus-like hop flavor." Read more here!

Where distributed: Sierra Nevada ships to many states. This particular beer may be more limited in distribution. Check their full distributor list!


REVIEW:
Appearance (5%): Poured slightly hazy golden (mostly clear golden) into a pint glass. Frothy white head. Most of the lacing is at the top of the glass. 4.5/5

Taste (40%): Follows the nose, with a citrus and grapefruit aftertaste. The bitterness is slightly more muted than other West Coast IPAs I've had, but the hops are definitely there. I like it, but it's because I like West Coast IPAs, too. 4.25/5

Mouthfeel (10%): Medium-bodied; good carbonation. Getting mostly a dry tongue. Some bitterness lingers on the tongue. Again, it has more the feel of a West Coast-style IPA. Definitely not juicy like its new England counterpart. 4.25/5

Overall (20%): An excellent IPA, but only if you like West Coast-style IPAs. This was one 12-pack I was willing to shell out some bucks for, even though it is 12 different beers in the pack. I was honestly hoping for a New England-style IPA in this one, as that's how Tree House Brewing made its mark so quickly in being one of the most sought-after beers in recent years. As of May 2017, Tree House Brewing had 4 of the top 8 beers in the BeerAdvocate Top 250, and 7 of the top 15. Heck, I planned a New England trip specifically to go to Tree House Brewing.

Here, while Sierra Nevada wanted to blend East and West, I think the overall experience was predominantly West Coast in nature. It's right in my ABV sweet spot, so that was also a plus. While I enjoyed the beer, people who were hoping for a more New England presence will likely be disappointed. 4.25/5