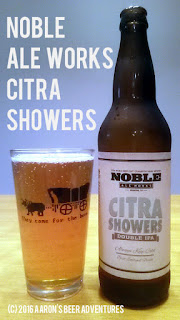 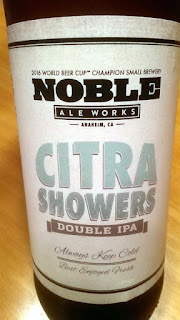 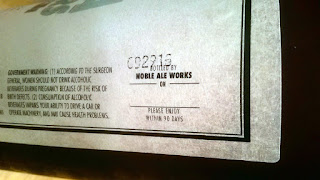 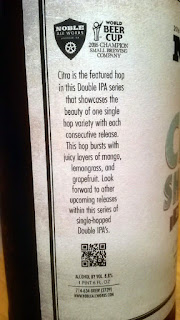 What's on the Bottle: "Citra is the featured hop in this Double IPA series that showcases the beauty of one single hop variety with each consecutive release. This hop bursts with juicy layers of mango, lemongrass, and grapefruit. Look forward to other upcoming releases within this series of single-hopped Double IPA's."

Where distributed: As of October 2016, Noble Ale Works has predominantly shipped their beer within Southern California (from about Santa Barbara down to San Diego). In early October 2016, Noble shipped its beers to Portland, Oregon, although it is still unknown if this will become a more regular or semi-regular distribution. See if Noble Ale Works ships to your area!

Taste (40%): Hop-forward, with malty-dank that really works with the tropical-hop experience. Citra hops galore. Flavorful from start to finish. Bitterness on the aftertaste eventually turns more citrus-tangerine and citrus peel. 4.75/5

Overall (20%): A world-class IPA. To me, it was worth the $9 spent. Extremely high ratings on BeerAdvocate (upwards of 97) and RateBeer (around 100). I was so pleasantly surprised to see Noble Ale Works ship to Oregon. I hope they keep shipping up here, because we definitely love our beer in the Pacific Northwest. As noted on the Tongue Tickles post, I was fortunate to visit the brewery last summer, and that trip remained one of the highlights. Now, if they ever released "Dank You For Being a Friend" up here, the party really will get started. 4.75/5