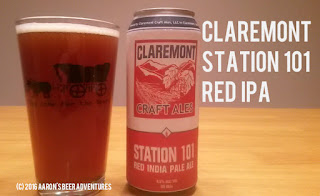 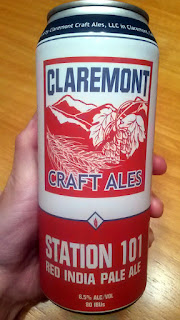 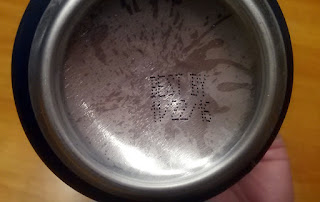 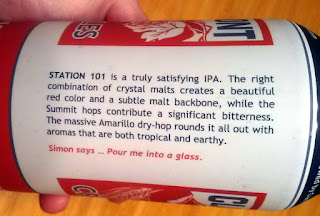 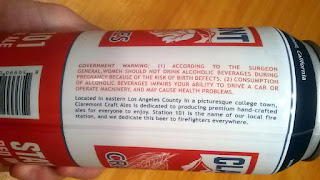 What's on the Can: "STATION 101 is a truly satisfying IPA. The right combination of crystal malts creates a beautiful red color and subtle malt backbone, while the Summit hops contribute a significant bitterness. The massive Amarillo dry-hop rounds it all out with aromas that are both tropical and earthy."

What's on the Website: "A truly satisfying IPA . . . the deep red appearance comes from the addition of highly kilned crystal malts, while the stiff bitterness comes from a heavy dose of Summit hops. Round it all out with the wonderful earthy and tropical aromas from the large Amarillo and Citra dry-hopping, and you have a delightfully dank and rich IPA." Read more here!

Mouthfeel (10%): Medium-bodied, some carbonation. Slightly dry on the tongue, some stickiness, a little rich, not overly bitter. 4/5

Overall (20%): An awesome IPA. Once again on the pricey side at $4 per tallboy, but in terms of flavor, I liked this one more than Jacaranda, namely a bigger tropical flavor and complementing malt. The beers I've tried from Claremont have been solid so far. I've got a few more Claremont brews to go! 4/5