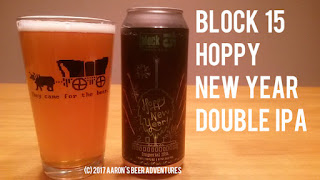 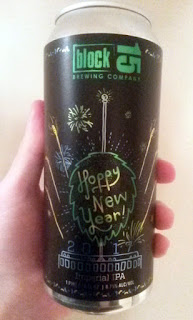 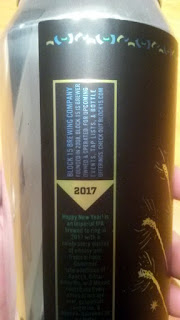 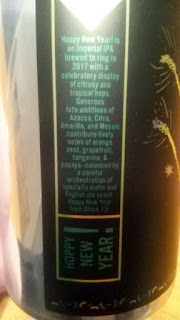 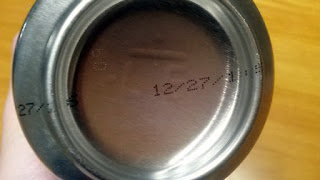 What's on the Can/Website: "Hoppy New Year! is an Imperial IPA brewed to ring in 2017 with a celebratory display of citrusy and tropical hops. Generous late-additions of Azacca, Citra, Amarillo, and Mosaic contribute lively notes of orange zest, grapefruit, tangerine, and papaya—balanced by a careful orchestration of specialty malts and English ale yeast. Hoppy New Year from Block 15!" Read more here!

When brewed? Special release to ring in 2017. Unknown if this will return for future new years.

Where distributed: As of January 2017, Block 15 Brewing distributes to select places within Oregon and Washington. Click to see where Block 15 distributes its beer!


REVIEW:
Appearance (5%): Poured mostly clear golden into a pint glass. Unfiltered, with sediment suspended in the beer. White head with some lacing. 4.25/5

Taste (40%): Dank from start to finish. Pleasing papaya and other tropical flavors. Much like Sticky Hands Marmalade, this one really brings the dankness front and center (plus the papaya). 4.25/5

Overall (20%): An excellent Double IPA. The guys at Belmont Station know me well enough to let me know about this one (which they smartly placed behind the counter probably so people wouldn't nab an entire case at once). Just after reading the description, I was looking forward to it, and Block 15 delivers yet another solid beer. I fully admit preferring Sticky Hands over Hoppy New Year, and yes, it was quite pricey at $15.59 for a 4-pack, but considering this is a limited-time offering, it was well worth the buy for science. 4/5